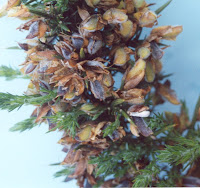 Gorse (Ulex europaeus) produces many seeds per season which can be viable for a long period, especially if the seed is buried underground. In the more temperate climate areas gorse has two reproductive periods per season. Craig Sixtus, who was studying gorse for his master's degree, investigated gorse seed viability to see if viability was influenced by altitude or climatic conditions. The sites were different altitude and climatic areas. The sites were Bainham, Onekaka, East Takaka, Hinewai Reserve, Trotters Gorge and Lake Ohau.
More...

Sites were inspected monthly and if there were seeds in the seed trays, they were removed and taken back to the laboratory. Samples were also taken from the pods on the bush when they were mature. When the seeds were tested for viability, scarification with concentrated sulphuric acid was used, which Craig had previously tested for (New Zealand Plant Protection, 2003).

The results showed that gorse produced mature seed pods almost continuously in the Golden Bay region (Bainham, Onekaka, and East Takaka). In the southern regions seed was only produced in the spring. The seed fall for each month varied from 0–256 seed/m2.

The germination of all fallen seed was similar, regardless of soil type, climatic conditions or site altitude. However, there were month-to-month differences. Seed from pods sampled during summer show that, and Golden Bay, gorse seed viability (60%) was higher than seed produced further south (30% at Lake Ohau). These results were published in the Agronomy New Zealand Volume 34.

Now Craig is about to begin his study for his PhD where he will study the phenology of the gorse pod moth and the impact that it has on the seed production of gorse throughout New Zealand. He will be testing the moth at various sites, including several North Island ones, as far north as Northland.