In most parts of the world bird foraging causes much damage in vineyards in the weeks leading up to harvest. If not protected, grape yield can be reduced to zero and bird pe

cks can induce molds to reduce the quality of the resulting wine. Bird control is therefore a high priority and a high cost to wine makers. While there has been a reasonable amount of research into methods of excluding birds from vineyards there has been little on what attracts birds to grapes. Understanding what makes up this attraction might allow for better precision and success in bird control methods. Val Saxton has coordinated an extended period of research on grape attractiveness to birds using resources at Lincoln University and the Marlborough Wine Research Centre.

An important step in this process was the development of an artificial grape made of gelatine which allowed Saxton to precisely vary various compounds inside these grapes. The artificial grapes could then be placed in a vineyard situation and bird behaviour recorded as they foraged on the grapes (see here for method). Earlier research had shown the importance of increasing sugar concentration and type of aroma in changing the attractiveness of grapes. In the most recent study, published in the American Journal of Enology and Viticulture, Saxton tested the hypothesis that high acid content in less ripe grapes made such grapes less palatable. 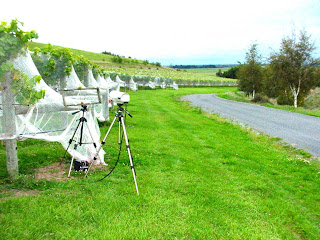 Artificial grapes were loaded with varying concentrations of tartaric and malic acids (the organic acids most common in grapes) as well as with varying sugar concentrations and placed into the field. Both the acids and sugars were in the range of concentrations found in grapes. Blackbirds (Turdus merula) and silvereyes (Zosterops lateralis), major pest species in New Zealand vineyards, were offered the grapes. These two species were found to be remarkably indifferent to acid levels as there was no behavioural response to different concentrations. Sugar concentrations were found to override acids. Birds have fewer taste receptors than mammals which may explain how they can ignore acids. There was certainly no support for acids acting as a defence for unripe grapes.

Posted by Adrian Paterson at 2:49 PM