Little blue penguins (Eudyptula minor) are the smallest penguins in the world and are found throughout New Zealand and southern Australia. They are exceptionally cute and cuddly and attract a vast amount of tourists to breeding colonies at Oamaru and Banks Peninsula, among many others. Unfortunately, since the arrival of humans in New Zealand, most little blue penguin populations on the mainland have been in a steady decline due to introduced predators, roadkill, human disturbance and fisheries by-catch. The decline of this charismatic penguin species must be halted in order to preserve not only the species but a significant amount of tourism revenue generated annually.

The numerous colonies of little blue penguins on the beautiful West Coast of New Zealand's South Island are some of those thought to be in decline. Sol Heber, from the Centre for Nature Conservation in Goettingen, Germany, along with Lincoln University ecologists Kerry-Jane Wilson and Laura Molles, studied the breeding biology and breeding success of little blue penguins on the West Coast as this was thought to be a possible factor contributing to the apparent decline.

Blue penguin breeding burrows at nine study sites were checked at regular intervals from 23 August 2006 to 18 December 2006. Each time the boxes were checked, the number of adults, eggs and chicks present was recorded in order to determine breeding success, incubation time, guard period and nestling period. Vertebrate tracking tunnels and traps were also used to determine what potential predators may be present in each of the nine study sites. 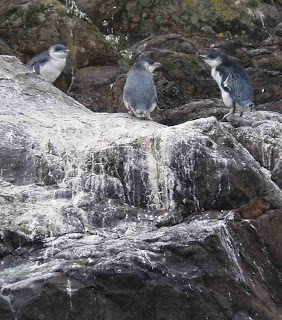 Blue penguins
Photo by Jim Allen.
(Used with permission.)
Hatching, fledging and overall breeding success were found to be 78.9, 83.9 and 66.2% respectively. These breeding success values were quite high compared to breeding success data from five other colonies in New Zealand and Australia. Incubation, guard and nestling periods were also found to be in a similar range of times to the other sites. Rat (Rattus rattus) tracks were found in 60% of the tracking tunnels laid, the only potential predator which left tracks. Eight rats and four stoats (Mustela erminea) were the only predators which were caught in traps. This is a large potential hazard for the blue penguin population.

These results have a variety of implications when it comes to conservation of this species. It appears that the breeding success of the West Coast little blue penguins is not low enough to be contributing to the decline. The impact of predators on the population is also not as high as previously thought with only around 5.6% and 10.7% of eggs and chicks being taken by predators respectively. This then begs the question, "What is actually causing the decline of little blue penguins on the West Coast?"

Heber, Wilson and Molles concluded that the primary cause is probably adult birds being run over when crossing roads. If true, it is none other than humans who are having the biggest impact on the West Coast blue penguin colonies. When an adult bird is removed from the population during breeding season there is the potential that any eggs or chicks it is looking after will also die and there will also be a loss in breeding in subsequent years. Therefore, control of adult mortality of little blue penguins is the key to their survival on the West Coast.

The results of the study were published in the New Zealand Journal of Zoology, volume 35, pages 63–71, and can be found here. For more about breeding sites go here.

This blog post was written by postgraduate student Warwick Allen as part of the course, Research Methods in Ecology (Ecol608).

Posted by WarwickAllen at 1:33 PM