A tough decision for mum 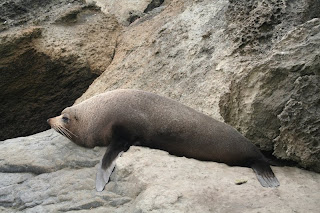 Pinnipeds are a widely distributed and highly diverse group of semi-aquatic marine mammals. These animals are unique in a sense that although they spend a lot of time in water, they have to come up on land to breed, moult and rest. Altogether, there are 3 families, the phocids, otariids and the odobenids. In New Zealand, we have 2 species from the Otariidae family, the New Zealand fur seal/ kekeno and the Hooker’s sea lion/ rapoko (Phocarctos hookeri).

New Zealand fur seals (Arctocephalus forsteri) were widely distributed before humans arrived. They could be found all throughout the coastlines of the North and South Island, as well as most offshore islands. However they were hunted for food by Maori, and Europeans further decimated their numbers for the pelt industry (as they did with pinnipeds throughout the world). Fortunately, due to full legal protection, their numbers are increasing and they are slowly re-colonising their former habitats.

NZ fur seals live in a wide variety of coastal habitats, but breeding colonies (also called rookeries) occur usually on exposed, rocky, rugged shores. In 1976, M. C. Crawley and G. J. Wilson observed that nearly all rookeries have shelters from storms or big waves, and have broken and irregular terrain (see the journal Tuatara 22(1):1–28). There are also hauling grounds, where non-breeding adult males literally “hang out” in large numbers. These sites are similar to, and quite often near, established rookeries.

In 1993, Christine Ryan, Graham Hickling and Kerry-Jayne Wilson of Lincoln University investigated the breeding habitat preference of the NZ fur seals in Banks Peninsula (see Wildlife Research, 24(2): 225–235 (1997)). Their aim was to see if there were any significant differences between the breeding sites and non-breeding sites. They found out that NZ fur seals indeed chose steeper, rockier sites for breeding and suggested that these criterion be used for determining future breeding sites for conservation purposes.

Fur seals choose sites to assist in behavioural thermoregulation. This is because peak breeding season often occur during the hottest time of the year and the seals are reluctant to cool off in the sea—females have pups and males are defending territories. As fur seals are superbly adapted to the cold seas, they need crevices and rocky pools to help thermoregulate. This behavioural preference was also seen in other species of fur seals in other regions of the world.

In addition to thermoregulation, preference of steeper, rockier sites would favour pups and females in terms of safety and shelter, and also minimise harassments by humans and probably adult male fur seals.

It has been suggested that the present distribution of fur seals habitat in Banks Peninsula may also be a product from hunting in the bygone eras. Individuals that escaped sealers may have modified site preferences and, therefore, recolonisation patterns of subsequent generations. Furthermore, fur seals have natal site fidelity, which means that they return to the place where they were born to breed, and this could be a confounding factor in their preference of breeding sites.

Kerry-Jayne Wilson told me recently that there has been an increase in seal numbers and also breeding sites on Banks Peninsula since the survey was done. It would be interesting to find out if the habitat preferences observed previously are still significant for breeding animals when high densities are reached. Indeed, Christine Ryan and colleagues in their 1997 publication also pointed out that an increase in numbers may lead to breeding animals expanding into a broader range of habitat types, maybe even to those which they classified as “not suitable”.

This blog post was written by postgraduate student Haojin (Jin) Tan as part of the course, Research Methods in Ecology (Ecol608).