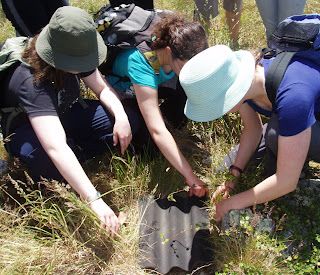 Over the last decade the ecologists at Lincoln University have been very involved with the ongoing restoration work on Quail Island in Lyttelton Harbour. Mike Bowie, in particular, has been a major force in keeping the connection going. During this time there have been numerous trips out to the island with dfferent groups of postgraduate and undergraduate students. Over the last week Sue Unsworth. in her role as science outreach co-ordinator, has organised four days of activities on the island involving Year 12 biology high school pupils from the Christchurch and Timaru areas. The students helped in ongoing restoration and conservation projects on the island. They checked tracking tunnels (containing inkpads that leave behind footprints)that monitoring for predators like mice and rats (and luckily found none as there has been a major control operation this year). There were also gull and gull chick counts and lizard lodge (corrugated squares that lizards love to live under) checks for monitoring lizard numbers and species. Despite variable weather and long tiring days, fun was had by all.

Posted by Adrian Paterson at 3:22 PM