Are two heads better than one? Kokakos and playback responses

This blog post was written by postgraduate student Jetzabel Gross as part of the course, Research Methods in Ecology (Ecol608). A Kōkako (Callaeas cinereus). Taken at Mt Bruce
Wildlife Centre, New Zealand.
Photo by Doug Mak
The perception of reality is different for each animal species and communication can be a very helpful resource. Yet animal communication skills are a complex topic to understand, for example, what is the function of bird songs? How are they perceived? Do only birds of the same species react to songs or do others as well? And more importantly are song emitters perceived differently by single or paired receivers?

These are some of the questions specialists working on bird behavior ask themselves and the research by Lincoln University's Laura Molles and Waikato University's Joseph Waas , whose results were published in the journal Animal Behavior in 2006, try to answer. Moreover with this study they wanted to generate knowledge of the advantages of both birds singing the same song at different times, or only the male singing, or the pair singing.

Hence, two variables were tested: one where the song of a single bird was broadcasted from one speaker and another where the song was split up between two speakers, simulating a duet. The perception of threat to a territory was measured by how fast nearby birds approached the playback speakers and by how long male and female birds of a pair spend next to each other. 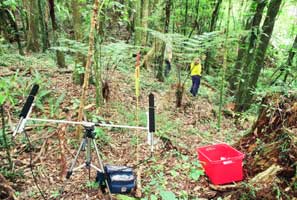 Photo by Guy Vickers
(Used with permission of Laura Molles,
kokakorecovery.org.nz )
To test these predictions in 2003 they conducted research in specially selected and marked areas of the Pongakawa Ecological Reserve, North Island, New Zealand. In these playback arenas, 11 territorial pairs of endemic and endangered, New Zealand kokako birds (Callaeas cinereus wilsoni) were tested and two playback stimuli were performed and each repeated four times. Observations were recorded visually and by audio indicating location of each bird and distance between pairs. The treatment consisted of three phases: a lure phase to attract the bird until it reached a specific position; a main playback, which lasted around three minutes and was the focal period where behaviours for the main findings of this research were extracted; and a post-playback period where observers kept monitoring birds for 30 minutes.

The main findings are as follows.

Vandercamp, Naugib and colleagues suggest that matching and anticipating are aggressive signals in kokako, which has been observed in a number of other species.

The relevance of this kind of study is to generate expanding knowledge of the different functions singing brings to birds, and how essential it is for the maintenance of the complex interactions between them. Finally, a solid understanding of the behaviour of any relevant species is essential for conservation efforts on them.