A Burning Issue for Magpies

This article was prepared by postgraduate student Laura Hollerbach as part of the ECOL 608 Research Methods in Ecology course. 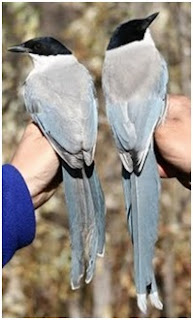 as “pretty loud and noisy” has been studied throughout its range but most recently a population in Northern Mongolia has been researched. Jin has spent two summers following these birds around watching how they adapted to the aftermath of a fire in 2009. The fire was human-induced and devastated 70,000 ha of wood- and grassland.
Jin recently completed her Lincoln University thesis on habitat use and population dynamics of the Azure-Winged Magpie and their response to fire in Northern Mongolia.

The Azure-Winged Magpie is a cooperative breeder, meaning that mainly non-breeding individuals help the breeding pair rear their chicks. Both sexes are similar in plumage and size - they have a black hood and pale blue wings and tails. The magpies mainly feed on invertebrates, seeds and fruits and live in social flocks. They lay five to nine eggs between April and July which are incubated by the females.

Jin conducted her fieldwork in Khonin Nuga, which is a valley in the West-Khentey region of Northern Mongolia. She was based in the research station of Georg-August University Göttingen (Germany) that was established in cooperation with the National University of Mongolia in 1997. The Khentey Mountains where the Siberian forest (also referred to as Taiga) meets the steppe are still widely untouched by humans. Jin located a 1.2 km2 home range for “her” colony with six areas utilised by the birds, one of which was particularly preferred. The preferred area was least affected by the fire and was characterised by having the densest, protective Padus asiatica shrub and the highest diversity in other plant species utilized by the magpies. The birds seem to have expanded their home range after the fire, which can possibly be explained by food availability being affected by the catastrophe.

In order to analyse population dynamics, Jin obtained data collected over a four-year period (2006-2009) from previous studies on the same colony. She found that over the years the colony size at the beginning of each breeding season was constant. However, the number of chicks that hatched and fledged declined significantly, and the adult survival rate decreased. This might be explained by the harsh winter and the fire during the study period. A constant juvenile survival rate is possibly associated with intensified helping behaviour after the fire. Jin found that the colony was an open population, meaning breeding with other populations occurs. The proportion of breeding adults was 26-67%, and one quarter of the females abandoned the partners they bred successfully with and approached a new male between breeding seasons.

Jin is about to finish her Master’s degree in “International Nature Conservation”. This degree is jointly offered by Lincoln University and Georg-August University and includes one semester at each university and a compulsory internship semester that provides an opportunity to work in a practical project anywhere in the world. The last section of the degree involves writing the master thesis.
“It was very hard work”, Jin admits, yet with a smile on her face. For Jin, working in Mongolia was a precious experience that provided her with a unique insight into the Mongolian culture. “It was interesting to learn about the Mongolians’ perspective on life. They are not hurried and solve problems on a day-to-day basis. You don’t find that any more in the developed world.” She also enjoyed the transportation which was riding the horse to work every day: “That’s something most people will never get to do in their lives.”

“After having finished my thesis I have more questions about the topic than before”, Jin laughs. Further research is required to identify long-term effects of fire on the colony.


This article was prepared by postgraduate student Laura Hollerbach as part of the ECOL 608 Research Methods in Ecology course.

Posted by Adrian Paterson at 3:33 PM