This article was prepared by postgraduate student Tim Sjoberg as part of the ECOL 608 Research Methods in Ecology course. 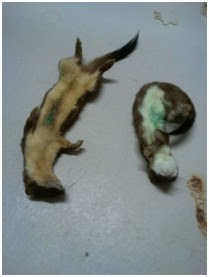 New Zealand wildlife evolved in the absence of mammalian predators. Birds (such as Kiwi, Mohua and Kokako to name a few) have particularly been impacted by the introduction of non-native predators, and this is reflected by the extinction of over 40% (Eason et al. 2010) of the pre-human land bird species.
Stoats (Mustela erminea) were introduced into New Zealand in 1884 for the control of rabbits which were reducing pasture production. Stoats moved from farmlands and into the native forests where they have become the most significant factor in New Zealand’s historic fauna decline. Their large home ranges (up to 100 hectares), excellent swimming ability, and furious appetite for any animal that moves, has made the stoat, one of the Department of Conservation’s (DoC) main targeted animals.

Control methods for stoats currently rely on labour intensive trapping and poisoning. However, the use of 1080 (sodium fluoroacetate) is becoming increasing unpopular in New Zealand, as public fears relating to the contamination of water supplies, possible sub-lethal effects on humans, welfare impacts on targeted species, and the potential of 1080 to kill native birds and other non-target species is still embroiled in controversy. At the present time there is no stoat specific toxin available.
Para-aminopropiophenone (PAPP) was investigated in the 1980’s as an alternative to 1080 for coyote (Canis latrans) control in North America. PAPP is a red blood cell toxin. This toxin works by reducing the oxygen supply to the brain, making animals lethargic, sleepy and unconscious prior to death, which is within 1 to 2 hours. This rapid time till death gives PAPP a high humane rating when compared with other toxins used worldwide.
PAPP was trialled by Connovation in conjunction with DoC at Lincoln University facilities, under the guidance of Professor Charlie Eason. Captured wild animals were given a PAPP paste within meat baits, which caused 95-100% mortality. There were no signs of discomfort, stress or vomiting associated with poisoning, and animals became unconscious quickly following ingesting the bait.
From this study , PAPP looks extremely useful for stoat control, with no toxins currently registered for use against stoats and few effective techniques are available to control them. PAPP has relative specificity for mammals, and is lethal to stoats at low doses. PAPP would therefore be a significant advance for wildlife protection in New Zealand. With stoats continuing to have significant impacts on a wide range of threatened birds, lizards and invertebrates, PAPP is a welcome relief for wildlife managers and long overdue.

Posted by Adrian Paterson at 12:40 PM