New Zealand is a hotspot for biological diversity. Most native species are only found on these shaky islands. Because of this we are a long way from knowing just how many species we share space with here in the south west Pacific. We are even further from knowing the names of all of these species. One group that is very diverse in New Zealand is the spiders. About 93% of spiders are endemic to (only found in) New Zealand. When it comes to naming spider species some of the most obvious traits to use are genitalia, especially the males who often have elaborate structures. Why the focus on what our leading NZ spider researcher Dr Cor Vink calls 'the naughty bits'? Spiders are often morphologically conservative within and between closely related species - they look too similar to easily and consistently tell apart. Intricate genitalia allow species to avoid making costly mistakes in breeding as only members of the same species will, well, fit together efficiently. This is extremely helpful for spider taxonomists as it allows species to be identified. Unhelpfully, males are often required to be sure of the identification as female genitalia are usually not as elaborate or variable as the males. Males are also difficult to find as they often make up only a small proportion of a population and so many NZ species are only tentatively described from females only. 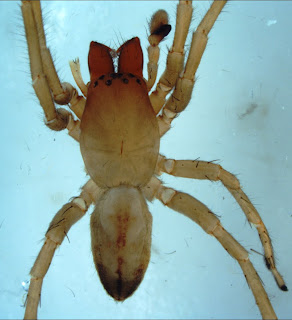 One example is from the genus Clubiona which has a worldwide distribution and about 14 NZ species. One species, Clubiona blesti Forster 1979, is found throughout the South Island but was only known from females. Spider researchers Jagoba Malumbres-Olarte and Cor Vink from Lincoln University Entomology Research Museum have just published in Zootaxa and describe how they finally found males for this species and that their genitalia agreed with this being a distinct species. The researchers also used molecular data to confirm that the males found belonged to the females of C. blesti and that the evolutionary separation was sufficient for C. blesti to be a distinct species. They also confirmed the species status of several other Clubiona species in New Zealand. Who would have thought that genitalia would be so interesting?
Posted by Adrian Paterson at 10:46 AM

Interesting... I didn't know there was such a high rate of endemism in NZ spiders.