﻿
I am an apostate. I've always wanted to say that but, of course, there are only certain situations in which you can say this. How did this come about? Well.... way back in the late 80s and early 90s when hair was big and ties were small I was a keen postgrad student at University of Otago. I was into evolutionary biology and the most exciting game in town at the time was biogeography (hey it still is!). Biogeography is the science of explaining the distribution of species - why a species is found in one place and not another. Species can either move themselves around through dispersal or they can be moved around by earth processes like continental drift or have their range split by things like mountain uplift - what is generally called vicariance. At the time vicariance was in the ascendency and dispersal was a dirty word to use. Hitting the top of the ecology and evolution charts at the time was a concept which we might think of as ultra-vicariance. Panbiogeography was the idea of Leon Croizat, a European biogeographer who had lived much of his life in the New World. He wrote some enormous books in the 1950s and 60s on his idea that life is the uppermost geological layer, and like other layers, the distribution of this layers is basically down to geological processes. Dispersal was seen as something that didn't have any real biogeographical meaning. By drawing lines, called 'tracks', between different populations of a species or close relatives you could reconstruct the history of the former wider distribution of a taxon which had been split apart over time. Quite what these tracks represented was a little hazy but that just added to the mystique. Croizat's ideas had mostly come and gone but a bunch of mainly New Zealand biologists had championed the idea of panbiogeography during the 1980s and it was again popular.

It was a great time to be a biogeography student. There was a whiff of revolution in the air and many of the main players would pass through University of Otago. Mike Heads lived in Dunedin at the time (and continues to be a major proponent of panbiogeography), my supervisor Russell Gray published in the area, Robin Craw, a leading disciple also lived locally, and Rod Page, who examined my PhD thesis, would visit from time to time. At the time a special issue of the New Zealand Journal of Zoology was published on panbiogeography which showcased this new method. So I was well-trained in this field, exposed to all the main players and could explain the methodology and philosophy of panbiogeography when I found myself at conferences in the States. I could tell my tracks from my main massings, my ocean baselines from my minimum spanning tree. I was a panbiogeography cheerleader! So what happened?


For me DNA happened. As our understanding of what DNA can tell us increased we were better able to understand the timing of evolutionary events. In study after study that my postgrads and I did, in moths, spiders, penguins, beetles, bats and mites we found that species distributions were just too young to have been derived from geological processes. This meant that dispersal was a dominant factor. This was also found in most New Zealand studies in most other labs. So a panbiogeographical explanation just didn't seem to fit with the timing of the patterns that we observed in taxa; lineages in New Zealand are just too young to have been here since the Gondwanan breakup and must have successfully dispersed here on their own. This idea of the importance of dispersal has been a constant theme on this blog, e.g. here, here, here, here, here, and here. And there panbiogeography languished for a time. For the last decade or so I have found my research turning more and more to looking at measuring the impact of dispersal on biogeography. However, their has also been a recent resurgence in panbiogeography papers that seem to have as a central theme the fact that we should not trust molecular studies in general and the molecular clock in particular. 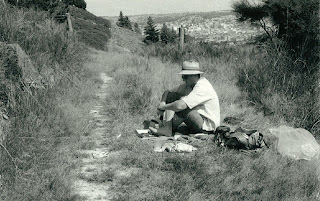 (Adrian, a young and keen panbiogeographer, sitting on a track in the late 1980s)
The continued promulgation  of an idea that seems to ignore the last 30 years of progress in evolutionary theory, molecular biology, computational biology and geology seems staggering. Jon Waters (University of Otago), Steve Trewick (Massey University) and I decided that enough was enough and that we needed to question how such an outmoded idea was still getting published in quite respectable journals. We recruited a few colleagues to help and have now published a Point of View in Systematic Biology. We focussed on one of the main tools of panbiogeography, the track. The track connects different parts of a taxon's distribution and has been defined as giving 'shape to or expression to the space and time that necessarily intervenes between disjunct localities' which does not actually tell you how and where to put your lines on a map (which seems to be arbitrary to a particular scenario). Often the tracks are in disagreement to phylogenetic reconstructions for a group and it is not clear then what a track is showing. Finally, as new data is collected, especially fossils outside the current known distribution, track networks will radically change. We conclude that given the lack of utility of panbiogeography, its lack of hard methodology, its lack of quantitativeness and the amount of evidence against the interpretations that it generates, that the only reason that panbiogeographers continue to publish is through some kind of feeling of being fair on the part of editors. However, science is not about giving 'equal time' to all hypotheses otherwise I would have to teach a lot more creation science. If hypothese are repeatedly shown to fail or lack usefulness then they should be put to one side until someone works out how to make the idea useful and successful. We feel that panbiogeography is in this situation and it is currently distracting a number of researchers from using methods that explain the world better.
PS I recently gave a talk on this at the 2013 Evolution conference in Utah.

Posted by Adrian Paterson at 2:11 PM