Green fingers getting a hand on Christchurch

This blog post was written by postgraduate student Catherine Hosted as part of the course, Research Methods in Ecology (Ecol608). Catherine revisits a Lincoln University research area that looks at urban ecology in Christchurch published in 2010.

After getting involved with the current Land Use Recovery Plan for Christchurch, an interest for Urban Ecology began brewing. Much of the new plan seems based on the economic vision of Christchurch and I began to worry about the ecology of our urban environment. Just as it seemed Mother Nature was creeping its way back into the concrete crevices, urban development is poised to strike back.

But do not fear! I began to delve into the wonders of Google and found that there is a fight for the maintenance and enhancement of Christchurch’s ecology (such as the Natural Environment Recovery Programme) and the role it will have in the new Christchurch, and it’s looking positive.
﻿﻿
﻿﻿﻿


First, let me enlighten you with the help of work by Lincoln researchers Glenn Stewart, Maria Ignatieva and Colin Meurk into the world of urban ecology and, more specifically, urban ecological networks.


To start with urban ecology has multiple meanings, be it for landscape architectures (seen as visual connections) or landscape ecologists (seen to provide connectivity for wildlife in fragmented landscapes). The concept isn’t a new fad; it’s been around for centuries. In the past the natural environment shaped settlements and in turn, ecological networks dominated. With the arrival of the industrial revolution man-made structures dominated, sweeping natural features and green spaces under the concrete carpet. In many cities green space was a result of wealth or religious statements.  And for other areas these spaces were the ‘leftovers’ of indigenous forests that avoided destruction and managed to sneak into urban infrastructure. ﻿﻿

The 70’s brought a smell of change in the air: an environmental movement. This movement changed the thinking of urban development to incorporate a more sustainable and green approach to urban living. Greenbelts and green fingers (ecological "fashion accessories") running through and around city landscapes began popping up globally. In the USA, greenbelts encouraged migration routes for wildlife and enhanced biodiversity. The smart developers also utilised these greenbelts as a form of public access- creating the term greenways. 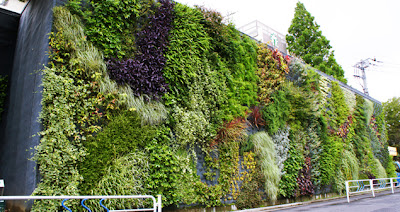 An example of a green wall: one of the new types of ecological networks
Sourced from : http://www.ecologygarden.jp/english/img/service_hk_banner02.jpg

And so it seems that Christchurch's shake up (no pun intended....) has given the opportunity for improved urban ecological networking. With the destruction of much of the past urban area, a huge potential for the creation of modern ecological network has arisen. It seems that papers, such as Ignativea et al, have been heard by the urban developers of Christchurch. The current NERP (Natural Environment Recovery Programme) produced to coincide with the LURP (Land Use Recovery Plan) aims to identify ways to rehabilitate and improve the natural environment through the rebuild.NERP'S main goal is to restore the natural environment to a level that can support biodiversity and economic prosperity as well as reconnecting people to our amazing natural features. They aim to make the most of available land (mainly brownfield) to create more forests, parks, gardens and integrate with stormwater and wastewater treatment. To add to this exciting potential, recent research by Glenn Stewart has shown that native biodiversity might not struggle in the battle with concrete and non-native species.  This research suggests that over 750,00 native tree, shrubs and other plants have been planted and successfully established over the last decade or so. Thanks to the resurgence in interest of or indigenous flora and fauna, these plants have a good chance to expand into a mixed-origin urban forest. If this is so, then what a great contribution that will be to the ecological networking and biodiversity of the garden city.

Posted by CatherineHosted at 2:28 PM