Life on a southern beech 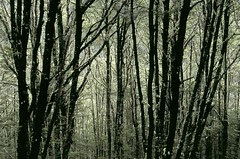 sooty black beech forest
Originally uploaded by Mollivan Jon
The southern beeches of New Zealand (Nothofagus species) make up a major forest-type which is extensive throughout the North and South Islands. Studies in beech forests usually focus on the roles of the trees as canopy for forest-floor ecosystems. A new study by John Marris and Rowan Emberson (Lincoln University) in association with James Johnson (University of Idaho) looked at the trees themselves as a habitat. More specifically, they examined the insect community on sooty mould - the characteristic black fuzz seen on the trunks and branches of some southern beeches. The mould grows on the sugary excretions of scale insects (Ultracoelostoma species), often forming a thick mat that provides a rich environment for invertebrates.

In a paper published in The Coleopterists Bulletin Marris, Emberson and Johnson describe how they collecte

d sections of beech branches from near Oxford, Canterbury, and placed them into rearing containers. After a week numerous beetle specimens were collected in the trap jar, or by hand as branches were manually searched. Underlining the hidden diversity of New Zealand ecosystems, seven different beetle species were collected from one Oxford branch. The most exciting find was of the beetle Metaxina ornata, the only member of the family Metaxinidae, which is unique to New Zealand. This species is rarely collected but was found to be common in their samples. Collections from Kaikoura and Craigieburn gave similar results.

How can such a small and uniform ecosystem like the branch of a beech tree support so many different species? The beetles probably take advantage of the scale insects, harvesting both the honeydew and the scales themselves. Several of the predatory Metaxina larvae were found inside scale tests (shell-like structures surrounding the scale insect), presumably after eating the former occupant. The pink-tinged gut contents of the larvae matched the pink colouration of the scales - smoking gun evidence of predation. Studies like this are fascinating for how they show just how little we know about the natural history of the hidden world of invertebrates.

Posted by Adrian Paterson at 5:39 PM