Our favourite plants, next generation's weeds? 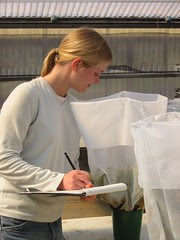 Kelly checks her clovers
Originally uploaded by Mollivan Jon
New Zealand's agricultural, horticultural, and forestry industries are battling an increasing number of weed species that reduce their productivity. Similarly, wildlands in New Zealand, like in many parts of the world, are coming under increasing pressure from invasive plants (weeds) that harm native biodiversity. Ecologists are working hard to try to figure out why a certain minority of introduced plants become troublesome weeds while most remain well behaved. If we could accurately predict which introduced species will become weeds, they could be controlled or eliminated before they became too widespread to stop.

Recent Lincoln University masters student and Fulbright scholar, Kelly Gravuer, tackled this problem of how to predict invasive plants, using the well-documented history of clover (Trifolium) introductions in New Zealand. Her results were recently published in the Proceedings of the National Academy of Sciences (USA).

More...
Why clover? While there are no native clover species in New Zealand, nobody is leaping about with a backpack of herbicide killing the many introduced clover species. Quite the opposite. As nitrogen-fixing plants, clovers are vital to pastoral farming. Clover roots contain clover-specialised Rhizobia bacteria, also introduced into New Zealand, which convert nitrogen from the air into nitrogen fertiliser for the soil. It is exactly because clovers are such useful plants that their biology and introduction into New Zealand have been exceptionally well documented, far better than weeds. Kelly concluded that clovers offered an excellent opportunity for ecologists to test and refine their methods of predicting plant invasion success.

What separated the successful invaders from the other clovers was not a particular combination of biological traits but largely the extent of species' association with people and human activities. This is despite an impressive diversity of biological traits among the New Zealand clovers. The clover species most likely to have been introduced to New Zealand, most likely to have naturalised, and most likely to be widespread, were all those species closely associated with people.

Of the nine intentionally introduced species that have naturalised, eight were widely grown commercially in agriculture. Those naturalised species that had not been intentionally introduced were typically species that occurred naturally in Britain, the main source of early European settlers for New Zealand, and were commonly recorded as seed contaminants in the early decades of New Zealand agriculture. Those naturalised species that became widespread in the wild had similarly strong associations with agriculture. Just knowing the biology of the species was of little use in predicting which species would be successful invaders. You had to know the extent and type of association each species had with people.

What does this mean? One message from Kelly's work is that it is going to be difficult to predict which cultivated plants will become future weeds without carefully taking into account what people do with these plants. For example, popular garden plants will be more likely to become weeds than unpopular plants, even if their popularity is solely determined by human aesthetics like flower colour or international gardening fashions and is unrelated to the plant's growth and seed production.

Most future weeds are likely to be very familiar to us—like Agapanthus, wilding pines, and kiwifruit—rather than obscure species that accidentally slipped across the border and spread without our help.