Why didn’t the Pukeko cross the road? 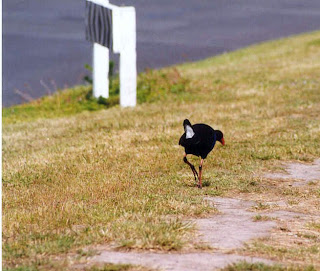 We all know the joke about the chicken crossing the road. It’s probably up there with “What time is it when an elephant sits on your fence?” as one of the earliest jokes you learn as a kid. There is a serious side to road crossing, however. Roads are a dangerous place if you are a bird and there are no guarantees that by crossing them you will, in fact, get to the other side. Roads are estimated to affect as much as 19% of the total area of the USA and 28% of the land area of New Zealand! That’s a lot of habitat and wildlife species have to deal with roads on a regular basis. One species that is commonly sighted near, and unfortunately on, roads all around New Zealand is the pukeko (Porphyrio porphyrio melanotus).

A recent study by Clare Washington (Lincoln University) published in New Zealand Natural Sciences looked at the roadside behaviour of Pukeko. The study was based at Otakaikino Reserve, just north of Christchurch, a wetland surrounded by motorways, with a resident population of pukekos who must regularly deal with roads. Clare spent 18 months observing the birds. She banded the resident birds and found that, although they were regularly on the roadside, they were not the birds that were struck by cars during the study; the dead birds seemed to be those that were wandering through the area.

More...
So why were the birds by the road? Roadsides can also be resources for birds. Clare found evidence that foraging was important near the road. Roadsides are regularly mowed and pukeko prefer new shoots of grass (wet weather and spring conditions also bring them to the road verge to feed on the flush of new growth). Pukeko also need grit for their gizzards. Gizzards are pouches in the digestive system where coarse food is ground up using pebbles to help with digestion. There are few sources of grit in the wetland and the birds were able to search along the roadside for hard rocks, like quartz. Finally, roadsides are very open spaces compared to wetlands

and the birds tended to congregate in social groups far more than would be randomly predicted. Perhaps the roadside is a good place to look for potential mates, establish dominance or just gossip!

The roadside appears to offer both danger and resources to local birds and this study underlines how little we actually know about this critical habitat.

Posted by Adrian Paterson at 11:53 AM

So what time is it when an elephant sits on your fence?

Time to get a new fence! hah hah haaah