Omnivorous insects are interesting and important beings, consuming both plant and animal matter. In agroecosystems they have been identified as potential biological control agents since they eat pest insects. Micromus tasmaniae, the brown lacewing, was the subject of a recent study, by Katherine Robinson and colleagues at Lincoln University (see the journal Basic and Applied Ecology, 9:172–181 (2008)). The brown lacewing is both a predator of many small insects and it feeds on nectar and pollen from flowers, making it omnivorous. Katherine and her colleagues attempted to understand the relationship between this predator and its prey and the effects of other food resources on the dynamics of this relationship within agroecosystems.

The authors report that it’s unclear how much predation actually affects plant- feeding pest species. However it has been reported that predators like the lacewing have been responsible for decreases in economic damage to crops by reducing herbivorous pest species. 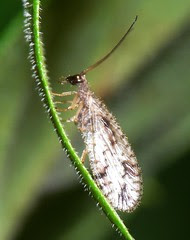 Brown lacewing Micromus sp.
(Photo by bramblejungle).
Prey provides nutrients necessary for survival, development and reproduction. In biological control complementary resources are necessary for the predator to complete its lifecycle. Many omnivorous predatory species in agroecosystems rely on floral resources to provide nectar and pollen at the adult stage of their lifecycle.

Despite a number of studies, the omnivore’s potential role in biological control has included little research into how plant resources affect pest suppression. This includes attributes such as longevity and fecundity, which act over a longer term to affect predation at the population level. The main thrust of this study was to examine the presence of floral resources and how they influence the predatory role of the omnivorous insect, the adult lacewing.

Katherine and her colleagues ran a number of experiments to determine whether floral resources affected omnivore predation dynamics. The first experiment established whether or not lacewings consumed plant matter as well as prey. This included the floral resource buckwheat Fagopyrum esculentum, which has a sucrose-rich nectar. The pea aphid Acyrthosiphon pisum was the prey subject. Lacewings were allocated to two treatments for 24 hours, those with flowers and those without, both containing aphids. The first treatment contained lacewings placed in an enclosure where one contained a water-filled vial containing buckwheat flowers, and the second treatment was an enclosure consisting of water only in the vial. After dissection, lacewings were examined using a reagent to determine the consumption of pollen or nectar.

Their second experiment noted the effect of flowers on lacewing longevity in the absence of prey. Again subjects were allocated to two treatments, one without buckwheat and one with. Survival of lacewings was recorded until death.

The results of this study highlighted that the presence of buckwheat flowers actually reduced consumption of aphids. However without prey availability, longevity for lacewings was greater when supplemented with flowers. Where there was an abundant supply of aphids, lacewing fecundity was not affected by flowers. When there were fewer aphids, the provision of buckwheat flowers meant that lacewings laid eggs earlier and more eggs were laid each day.

This study has demonstrated that floral resources may play a role in mediation in omnivore and prey relationships, and with regard to biological control, flowers may have both positive and negative effects.

Check out these video clips of the lacewing doing what she does best, balancing her diet with meat and flowers. It's not surprising that this species common name is the ant lion! (Used by permission, Advanced Video Productions, Christchurch, New Zealand.)

This blog post was written by postgraduate student Marlene Leggett as part of the course, Research Methods in Ecology (Ecol608).