Will nature sort itself out?

“At worst, the current practice of founding new populations of endangered species with such small numbers of founders may be inducing widespread reproductive failure and hastening their extinction.”
Briskie & Mackintosh 2004 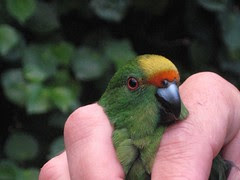 Orange-fronted parakeet
(Cyanoramphus malherbi),
found only in New Zealand,
& classified nationally critical.
Photo by Frances Schmechel
Will the Anthropocene era be recorded as a period when Earth’s biota were homogenised by a single ape-like species (Homo sapiens) who dominated Earth’s resources, or will it be recorded as a time when biotic homogenisation was narrowly averted by the efforts of ecologists and conservation biologists? The answer is probably neither, but it will lie somewhere in the middle. Nevertheless, will the few who seek or possess knowledge vital to the recovery of many extinction-prone species convince their ambivalent ape-like con-specifics that ‘nature will not sort itself out’ and much biological diversity might be lost?

Conservation biology is central to the recovery of many of Earth’s species and ecosystems. Conservation managers tend to work within governmental agencies and, therefore, must contend with other agencies for funds. Human education and health, for example, are much more likely to secure funds than biological conservation. Thus, endangered species are often managed with insufficient or limited resources. A dilemma arises out of this situation; should one allocate a large portion of the funds to saving few extinction-threatened species, or spread the funds across many lesser-threatened species? (See a Radio New Zealand discussion on this.) Surely, it is the latter that have a greater chance for post-Anthropocene survival.

Lincoln University’s ecology and entomology technician, Myles Mackintosh, investigated hatching failure in bird species that had passed through population bottlenecks. (Bottlenecks are a short-term drop in population size that causes the loss of genetic variation in the population). This was carried for his Master of Science degree, supervised by Dr. James Briskie (University of Canterbury). In their article, published in the (prestigious) Proceedings of the National Academy of Sciences, they recommend that “conservation managers revise the protocols they use for [species] reintroductions or they may unwittingly reduce the long-term viability of the species they are trying to save.” By funnelling a population through a genetic bottleneck, instead of lessening the extinction risk for some species, conservation managers could be binding these species to their endangered status and possibly extinction.

When reintroducing few individuals from a small population to form a new population, there is, by chance, a high likelihood of reintroducing individuals that share similar genetic make-up. This means that the genetic range of all the members of the future population is governed by the genetic make-up of the founder individuals (causing chance genetic drift away from the source population). Because these individuals have no option but to mate with each other, inbreeding occurs. Inbreeding can reduce bird fitness by exposing hidden bad genes, which can be seen as reduced hatching success, or weakened immune responses to disease.

Myles and Jim analysed hatching failure rate and bottleneck size in 37 species that had suffered bottlenecks and compared them with 15 non-bottlenecked species. They found that hatching failure was significantly greater among species that had passed through bottlenecks of fewer than 150 individuals. Thus, at least 300 individuals are required to maintain just two populations. However, all is not lost; the number of individuals that contribute to subsequent generations (called the effective population) is much lower than the total population size. Therefore, the minimum population size can be vastly reduced, but only if conservation managers understand which individuals can and will have viable offspring. The trick here is that each individual must be strictly managed and that is unlikely in the wild (the particulars of captive breeding threatened species are a separate issue).

Currently in New Zealand, an average of around 40 individual birds are typically trans-located to seed a new population. Worringly, this is less than one third of the 150 that Myles and Jim found necessary to overcome negative effects of bottlenecks in trans-located birds. If we continue to delay management until species become rare, and there are many such species that are currently declining in number, it may be too late for long-term recovery. So, should we forget about the single and needy species, for now, to prevent the decline of many other species later?

Without doubt, conservation managers intend to do what is best for species; however, can they heed the theory that is passed down from ecologists and conservation biologists, like Myles and Jim, with their meagre resources? It seems, that conservation managers cannot, or do not, follow such advice and are forced to focus their resources too late or in the wrong areas. For now at least, much conservation effort is funnelled into few iconic and/or critically endangered species (e.g. kakapo). Thus, it often seems a species must become critically endangered before sufficient funds are allocated to its recovery.

To ensure that species are not confined to this endangered species merry-go-round, populations must be managed before they decline, or at least when population numbers are well above 300 individuals (enough for just two distinct populations). Intervention thresholds must be set higher and additional funds must be allocated. I believe that it is immoral to ignore the demise of one species over another, and yet if current trends continue, we will soon be forced to make such difficult decisions or find a way to manage many more species.

This blog post was written by postgraduate student Phil Cochrane as part of the course, Research Methods in Ecology (Ecol608).

What is the plight of the Banks Peninsula tree weta, Hemideina ricta, the rarest tree weta in New Zealand? The Banks Peninsula Conservation Trust helped Lincoln University contact over 40 enthusiastic landowners keen to know if they had weta on their patch. The resulting Weta Watchers group has helped put out and monitor safe-houses for the weta. These “weta motels” provide a predator-proof refuge, and are easily checked, avoiding the need to damage their natural hiding places.

Weta have been knocked back by introduced predators, especially rats, mice and hedgehogs. Bush clearance has reduced and fragmented their habitat, although fallen totara and broadleaf logs provide some cover in otherwise open pasture. Locals recall seeing many more weta in the past than now.

Landowners are keen to give the weta a better chance once they realise that they are endangered - awareness and information on conserving weta and their habitat are important. An impressive number of Peninsula farmers have already fenced and covenanted areas of native bush, realising it has special value and won’t regenerate while grazed. This is good news for weta and other wildlife, and will allow populations to build, especially if introduced predators are kept in check. Weta motels on newl 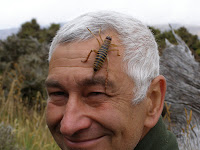 y-protected bush are a good way to monitor resulting changes.

H. ricta is now found only from east Pigeon Bay south to the Akaroa heads. One other species, Hemideina femorata (the Canterbury tree weta) occurs on Banks Peninsula, as well as from Kaikoura to Christchurch. Although in better numbers than H. ricta, its conservation is also important. They look quite similar, but a magnifying lens can be used to count file-like ridges on the side of the abdomen – H. femorata has fewer. DNA provides another means to distinguish them. “Long-drops” will be fitted under some motels to collect frass (weta droppings) for species identification through residual DNA contained in the frass.

Interbreeding is another possible risk to the endangered H. ricta. DNA analysis will show to what extend these species interbreed, and whether their offspring are sterile.

For more on weta motels you can look here and, for a more technical treatment, here.
Posted by Adrian Paterson at 3:24 PM No comments: