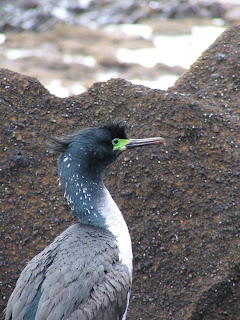 Pitt island shag
Photo by Kerry-Jayne Wilson,
Lincoln University.
There are over 80 breeding species of seabirds in the New Zealand region and one of them, the Pitt island shag (left), is also endangered. Nearly half are endemic, meaning they are found only in New Zealand. A special report on the current state of New Zealand’s seabirds was created in 2006 by seabird expert Kerry-Jayne Wilson (Lincoln University) for the Ornithological Society of New Zealand. The results are, unfortunately, quite grim. What’s even more disappointing is the lack of funding, support and research of these seabirds. I was quite astonished after reading this report as to how little is known of their status.

The main groups of birds the report refers to are as follows: albatrosses, petrels, penguins, shags, gannets and boobies, gulls, skuas and terns and Kermadec Island seabirds.

New Zealand, according to the report can be called the “home of the albatross, with 13 of 24 taxa of the world found there. Of that, 9 are endemic.” Quite impressive, I’d say. The petrels are a diverse taxa and share endemism with the albatrosses. Five of the six species of penguins that breed in New Zealand are in decline. Four are endemic. According to Kerry-Jayne Wilson, “Shags are a poorly studied group whose conservation needs are inadequately documented. For example, the biology of black and pied shags is moderately well known but little black shags have been little studied.”

Among New Zealand’s seabirds in decline are many poorly-known New Zealand endemics. While an increasing population trend of the Australasian gannet proves hopeful, more information on the breeding biology and population trends of the masked booby is needed. Of the three species of gulls found in New Zealand, the black-billed gull is the one that is endemic, endangered and declining. Related to the gulls is the skua, also refered to by Kerry-Jayne as an aggressive predator, is now subject to intensive study by an Auckland University student. “Of the 5 species of breeding terns, 3 are endemic. The New Zealand fairy tern is the country’s most critically endangered seabird with only 10 breeding pairs in Northland.” Finally, the Kermadec Islands provide the only place in New Zealand where a number of tropical and sub-tropical seabirds breed.

Some key findings of this report were that “fisheries by-catch is a serious threat to albatrosses and some petrels and recreational set-net fishing poses an unquantifiable threat to penguins, shearwaters and shags.” Since this practice clearly affects many of New Zealand’s seabirds, it is my suggestion that alternative environmental and cost friendly fishing practices be proposed. As Kerry-Jayne Wilson says,“The conservation needs of most seabirds are not being met and unfortunately, much of the research on seabirds is driven by pressure from external agencies, rather than the needs of endangered species."

When taking into account the high endemism in New Zealand’s seabirds, one might expect there to be much enthusiasm regarding their conservation! Sadly, that’s not the case. Aside from the popular blue-penguin student projects taking place at various universities, interest in seabirds is, well, not so popular. What about the shags and petrels? Surely New Zealand's Department of Conservation has to have some interest. Well, no. DoC no longer has dedicated seabird specialists although there are a number of part-time staff working on seabird issues. According to Kerry-Jayne, the problem lies in the “lack of continuity and loss of expertise as skilled temporary staff move on at the end of their terms of employment.”

Overall, there are a number of organizations and volunteers concerned with the future of New Zealand’s seabirds looking to make a difference. With the appropriate funding, they would be able to. As for interested students, simply apply.

This blog post was written by postgraduate student Jessica Parisi as part of the course, Research Methods in Ecology (Ecol608).