Blue penguin population decline on the West Coast: is it caused by low breeding success?

Editor's note: this is an additional summary and commentary on the West Coast blue penguin story that was reported on last week by Wawrick Allen. 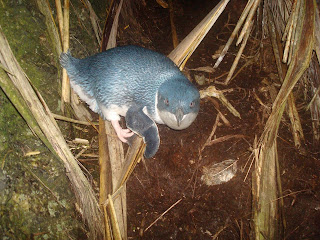 Photo by Kerry-Jane Wilson,
Lincoln University.
Even though blue penguins (Eudyptula minor) are still relatively common on New Zealand’s offshore islands, surveys by the West Coast Blue Penguin Trust indicate that there are only a few hundred left on the West Coast of the South Island mainland. But what is making one of the cutest and most beautiful birds of New Zealand decline in abundance? Is the blue penguin another victim of New Zealand’s numerous introduced predator species? Do possums (Trichosurus vulpecula) and stoats (Mustela erminea) account for this huge decline in the last 30 years by feeding on little blue penguin eggs and chicks? Or is the decline due to road kills caused by a bigger exotic species called Homo sapiens that runs them over with their speedy cars?

Apart from these reasons, the blue penguins might also have problems with the difficult tasks of finding a good nesting site, laying one or two eggs, keeping them warm until the chicks hatch, and rearing them until they are prepared for the big, wide world. Before the research described in this blog, not enough was known about the breeding biology of the West Coast's blue penguins to determine whether environmental or biological factors were the most important reasons contributing to the population decline.

Masters student Sol Heber, under the supervision of ornithologist Kerry-Jane Wilson and behavioural ecologist Laura Molles at Lincoln University, examined the breeding biology and breeding success of the West Coast penguin population. This work was published in a 2008 issue of the New Zealand Journal of Zoology. 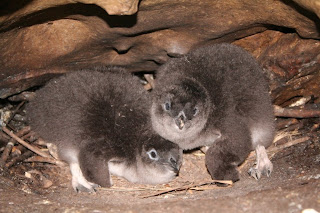 Blue penguin chicks.
Photo by Sol Herber,
Canterbury University.
Nine study sites distributed along the West Coast were observed during breeding season from August to December 2007. These study sites were checked several times a week for eggs, hatched or fledged chicks as well as potential predators. The hatching, fledging and breeding success rates were rather high: 78.9% of the eggs that were laid hatched, 83.9% of the hatched chicks fledged and the overall breeding success, meaning chicks that fledged out of the laid eggs, was 66.2%. These results are better than expected, showing that the blue penguins are doing well in breeding and that reasons other than low breeding success must be the main cause for the declining populations (unless 2007 was an exceptional year, which is unlikely). Some of these reasons have been described in this article and should be further investigated as soon as possible in order stop the alarming decline of blue penguin populations. 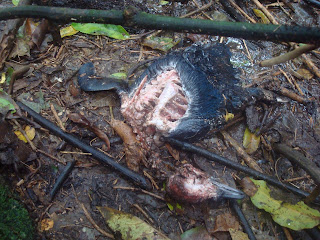 Penguin chick preyed on by a stoat.
Photo by Kerry-Jane Wilson,
Lincoln University.
In just the five month time period of this study, 15 road kills of little blue penguins were observed. This number doesn’t even include how many roadkills are not counted and how many happen at other study sites or over the duration of a whole year. As blue penguins are busy breeders and rear up to two chicks a year with both parents required to rear them, one adult road kill can account for the removal of up to three individuals from the population.

Even though only 10.7% of chicks were taken by predators, this hazard should also not be taken lightly. Other factors that may affect the West Coast blue penguin population are all human caused problems such as predation by dogs and habitat loss caused by erosion, subdivision and development of housing allotments. Furthermore, drowning in fish nets (by-catch) might constitute a sea mortality factor. More research is urgently needed to quantify adult mortality caused by all these factors, in particular road kill. Hazardous road crossing points regularly used by blue penguins should also be identified and modified.

This blog post was written by postgraduate student Sara Bauer as part of the course, Research Methods in Ecology (Ecol608).