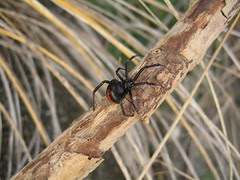 Katipo spider
Photo by Mollivan Jon
In the face of degradation of the environment and loss of species biodiversity, there is a call for innovative bio-indicators. New Zealand native spiders have answered it with their usefulness for measuring an ecosystem’s “health.” They can be used to monitor ecological restoration of natural and agricultural systems and monitor land and air pollution from industrial processes.

The tricky part is how to measure and monitor the biodiversity of spider species and their relative abundance at a given location. Several sampling methods are available for this kind of work but they will all give different results. Perhaps the easiest way of going about it is to use insecticide gas or ‘chemical fogging’ to cause any invertebrates in the area to drop dead to the ground and then be picked up for later examination. Another similar method is to use pitfall traps filled with a substance such as ethanol in which any invertebrate walking along can stumble into. These methods are very effective in the amount of spiders captured for examination but if you are investigating endangered species with conservation significance, it can prove counter-productive. The endangered species may not be spiders either as these sampling methods are non-discriminate to non-target species.

Non-lethal sampling techniques can be employed such as timed hand searches or basically shaking foliage until spiders fall off. These techniques have the advantage of being selective for which species, if any, are killed for further examination. A new non-lethal approach was described by Simon Hodge (Imperial College, London), Cor Vink (AgResearch, Lincoln), Jonathan Banks (Waikato University), and Mike Bowie (Lincoln University), published in a 2007 issue of the Journal of Arachnology.

They looked at the use of a new non-lethal sampling technique with artificial homes being placed out in the field for spiders to take shelter in. The inspiration for this idea came from previous researchers using the same technique to measure tree weta communities. Often these researchers would open up their weta shelters only to find native spiders hiding away instead. The shelters built for the spiders consisted of a block of wood with a central groove cut two thirds of the way down, a transparent plastic cover attached over the groove as a window and black polythene stapled over the window to block out light. All the researchers have to do is peal back the black cover to observe any spiders present.

Simon Hodge and colleagues found that within a year, 91% of their shelters placed in the field were occupied by spiders. Environmental factors such as soil moisture, light intensity on the shelter and ground slope were measured to see if they impacted occupancy frequencies but they proved inconclusive. The species of tree that the shelters were placed on and the height on the tree did not have an impact of occupancy rates either. The results of this research show the effectiveness of these shelters at harbouring spiders but as a surveying technique, the abundance and diversity of spiders measured is low compared to the current conventional sampling methods I mentioned earlier. The shelters also don’t cater for all species of spiders as only those that are tree dwelling are likely to adopt them as their new home.

Overall this sampling method can be employed not only as bio-indicator of the environment and biodiversity but as a tool for measuring spider communities within a habitat. To be effective in the field, this sampling technique would need to be accompanied by another sampling technique to bolster the amount of individuals and species of spiders found.

This blog post was written by postgraduate student Karel Lindsay as part of the course, Research Methods in Ecology (Ecol608).

Posted by Karel Lindsay at 9:00 AM