The Agriculture and Life Sciences Faculty at Lincoln University, including the Department of Ecology, is offering summer research scholarships over the summer vacation, valued at $5,000 each (tax free). The scholarship will last for 10 weeks. Scholarships will be awarded based on academic merit. So if you want to work on sandy beaches or follow tui around or search for weta in exotic places then have a look at the projects on offer.

We have run summer scholarships for the last few years and many students have had a lot of fun getting involved with research (and getting paid!). Note that it may say that the due date is the 7th September when it is actually the 14th September. 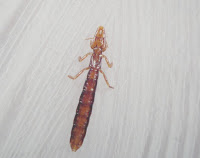 You won't usually see us evolutionary and ecological researchers driving around in a Ferrari, holidaying at tropical resorts or dining at the best establishments. But, hey, there are some perks! I am now the proud namesake of a bird louse species. Out there at this very moment crawling over the Gray-headed Tanager (Eucometis penicillata) somewhere in Central America are little feather lice called Myrsidea patersoni. The authors, Roger Price and Kevin Johnson, have named five new species of Myrsidea after people who have worked on lice, in the most recent issue of Zootaxa, including my colleague from down the corridor, Rob Cruickshank. Myrsidea is a reasonably common genus with over 120 species of lice that are found on passerine (song or perching) birds. Rob's louse, Myrsidea cruickshanki, is found on Carniol's Tanager (Chlorothraupis carmioli). Bird lice are little ectoparasites that live in the feathers of birds where they live their whole life-cycle feeding on debris and feather pulp. All birds have louse species and most birds around you will have some lice on them. I once picked 200+ off one Royal Albatross and that's not unusual for these big birds.

The good thing about having a louse named after you, relative to most invertebrates, is that you do at least have a nice bird host species to show people ("OK, OK so the louse doesn't look like much but just look at what it lives on"). You're probably thinking about why so many people work on lice given that one or two would surely be enough. It turns out that lice are usually passed from parents to offspring in much the same way as genes. This means that the coevolve very closely with their host and allows the opportunity for evolutionary biologists to look at recurring patterns. That's where Rob and I have done our work, mainly with seabird lice (the picture is actually of a seabird louse from the Halipeurus genus found on shearwaters). Still, there's plenty of work to be done and there is a good chance that I might be able to reciprocate the honour for the authors with some songbird louse species of my own one day.

On the beach: plant communities in dune systems 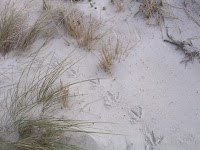 Sand dune habitats are found all around the world. Sandy coasts are ever-changing with the interactions between climate, geology and vegetation. Dune habitats have to contend with storm surges, wind and rain and human impacts. Considering how important these areas are to human activities it is surprising that so little is known about the biology of these systems. Dune systems are generally divided into three regions: foredune, interdune and backdune. Also, three different plant groups are found in dunes: dune builders (fast growing plants whose stems and roots stabilise the dunes), burial tolerant stabilisers (plants with rhizomes that can tolerate overwash and flooding and stabilise flat areas) and burial intolerant stabilisers (longer-lived species found in older dunes).

A study by Hannah Buckley (Lincoln University) with Thomas Miller and Elise Gornish, colleagues from Florida State University, has been published in Plant Ecology. This study is the first to survey plant communities of dune systems over a relatively long period. The research took place on St George Island in Apalachicola Bay in north Florida. 249 plots were followed from 1999-2007 with measurements of the plants found growing in each plot being recorded each northern Autumn. The three dune regions had very different communities of plant species. Community structure was determined by elevation, soil moisture and soil richness. Hurricanes appeared to have a major role in reducing the diversity present. Diversity was low at the beginning of the study as Hurricane George had affected the area the year before (1998). Diversity then increased over the following years until Hurricanes Ivan (2004) and Denis (2005) reduced the diversity again. These results highlight the dynamic nature of plant communities in dune systems. It appears that there is a clear form of succession occurring in these habitats but that storm events tend to push the communities off their trajectories. Buckley is continuing to look at the processes that shape dune plant communities and has set up plots around New Zealand to do this work.

Posted by Adrian Paterson at 3:07 PM No comments: