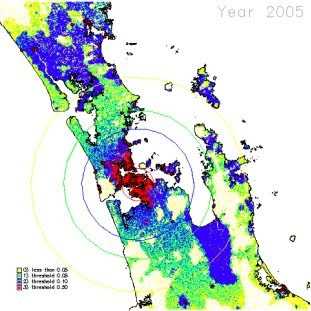 Although the Argentine ant (Linepithema humile) is not the fourth best novelty folk group in New Zealand it is impressively ranked in the top 6 most invasive ant species in the world. In a country like New Zealand this species poses a threat to the local biodiversity by removing native ant species and other prey species and thereby disrupting local ecosystems. Although the ant has established in New Zealand in the Auckland area there is a lot effort spent in trying to stop its spread. In the war against the invasion, knowledge of the future plans of the enemy is valuable in turning the tide. One way of obtaining this information is to create a model which can give us a good idea of where the ant is likely to spread to next so that we can stop this from happening.

In research just published in Ecological Applications, researchers Joel Pitt and Sue Worner, members of the Lincoln University’s Bio-Protection Research Centre, and their colleague Andrew Suarez from University of Illinois, Urbana, have created models that allow greater accuracy in examining how Argentine ants spread around the landscape. The researchers were frustrated that most existing models only dealt with an abstract environment that was all of one type which helped with the mathematics of the model but was very unrealistic. The team decided to use a GIS approach to include realistic landscape information, such as land cover and local temperature, in their models. A simulation was run for each year from 1990-2005 to look at where the ants would move to and likely survive. What they found was that the simple model assuming a similar landscape was actually quite accurate for the first few years of the invasion. The more complicated model started to perform better after a few years and was reasonably accurate with its predictions when we look at actual spread in 2005 (predicting hotspots of activity in Auckland, Hamilton, Whangerei, Great Barrier Island and Tiri Matangi Island). The figure above shows the areas potentially able to be colonised by 2005 predicted by the simple model (circular lines), the complicated model (colours) and what actually happened (red dots - look closely, they are hard to spot away from Auckland!). The success of this approach will allow managers to better target their resources into monitoring areas that are most likely to be invaded.

Posted by Adrian Paterson at 5:07 PM