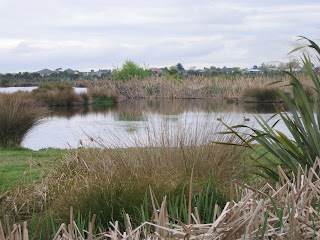 Cats are common pets all around the world. Nowhere is this so pronounced as in New Zealand where we have the highest rate of cats/households in the world. One of things that we like about cats is their independence but this comes with a downside - what does your cat do when it is not in the home? Cats are natural predators and we know that they will catch almost any sort of prey. Concerns have been raised that cats may have many negative impacts on local wildlife, especially where their homes are near wild areas. In a study recently published by researchers from Lincoln University (postgraduate students Shelley Morgan, Cara Hansen, and their supervisors James Ross, Shaun Ogilvie and Adrian Paterson) and University of Tennessee (Graham Hickling) in Wildlife Research, this issue was directly addressed. Travis Wetland is entirely surrounded by suburbs in north eastern Christchurch. It is about 120 ha and is the largest freshwater remnant of its type left in Canterbury. As such it has many important natural values and, conveniently, lots of cats live around the periphery. This study surveyed owners around the wetland to find out how many cats were present, what the cats ate, how many were kept indoors for part of the day, and what prey they brought back home. Twenty-one cats were given radio transmitters to examine just where the moggies were going to over a 12 month period. So what did we find out about the secret lives of felines?.

First, there were a lot of cats - about 600 in the study area or 6.4/ha. Second, the cats didn't mind getting their fur wet. Most cats spent about 10% of their time inside the wetland, moving up to 200 m from the boundary. Of course, being cats, they spent nearly 2/3 of their time at home. Cats moved up to 270 m away from home but usually stayed within 100 m. Male cats had ranges three times larger than females. Almost 1000 prey items were collected during the study with 38% being rodents (mostly mice), 20% birds (almost all introduced birds, like sparrows), 18% reptiles and 22% insects (mainly moths). The bulk of hunting was done by cats from 1 to 6 years of age. Interestingly, cats with bells took more prey (probably because their owners correctly identified them as good hunters). So what does this all mean? Well it is clear that domestic cats do move into nearby 'wild' areas (even those that are quite wet). While there they do kill a great range of species. From a conservation point of view they certainly have an impact on species like native lizards. But of course nothing is that simple. The cats' main prey species are either direct predators (e.g. rodents) or competitors for food (e.g. sparrows) of native species found in the wetland. The question then becomes do the positive outcomes of having cats around, removing problems for native species, outweigh the negative outcomes, killing native species. At this point we can't answer that question. We are currently doing a similar study on cats living around a bush reserve on Banks Peninsula which may tell us more. So overall cats are not the villains they are made out be by some but neither are they as harmless as championed by others.

Posted by Adrian Paterson at 10:16 AM No comments: