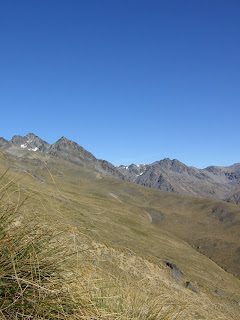 In order to estimate the total population of a species you need to know the mean size of local populations and where the populations are. Numbers and amount of sites where species are present are usually linked and this is referred to as the abundance-occupancy relationship. However, there are many exceptions to this rule and it appears that many organism traits may affect either local numbers or distribution. Much of the research in this area, both showing the link between abundance and occupancy and where life history traits impact on this link, has been done on birds and insects. Plants, major drivers in ecosystems, have seldom been examined. Until now. Hannah Buckley (Lincoln University) and Robert Freckleton (University of Sheffield) have used data from sites that have been monitored for 25 years. The 52 high country tussock grassland sites are scattered throughout Otago and southern Canterbury of the South Island of New Zealand. The number of species and the number of individuals at each site were measured in the mid 1980s, mid 1990s and 2005-2007. The length of time that the plant populations have been monitored make for an unique opportunity to examine long term changes in species abundance and distribution. A paper in the Journal of Ecology has just been published on what they found.More...Occupancy and abundance of species at each site was highly correlated through all sample periods. Within each site, there was movement of species with 76% of species colonising and about 20% of species being lost from the sample transects. Traits that might impact on relationship between species abundance and distribution were measured. If a plant was ‘weedy’ (fast growing in most habitats) enabled the species to be more widely distributed than expected. If a plant was clonal (not sexually reproducing) this enabled the species to be more abundant at a site than expected. Surprisingly, dispersal ability and size did not affect a plant species’ distribution and abundance. Overall, this study is a positive step forward. It confirms that plants respond in similar ways to other organisms and increases our understanding on how plants species persist and move around the landscape.
Posted by Adrian Paterson at 3:09 PM No comments: