Vegetarian zombie weevils rise from down under 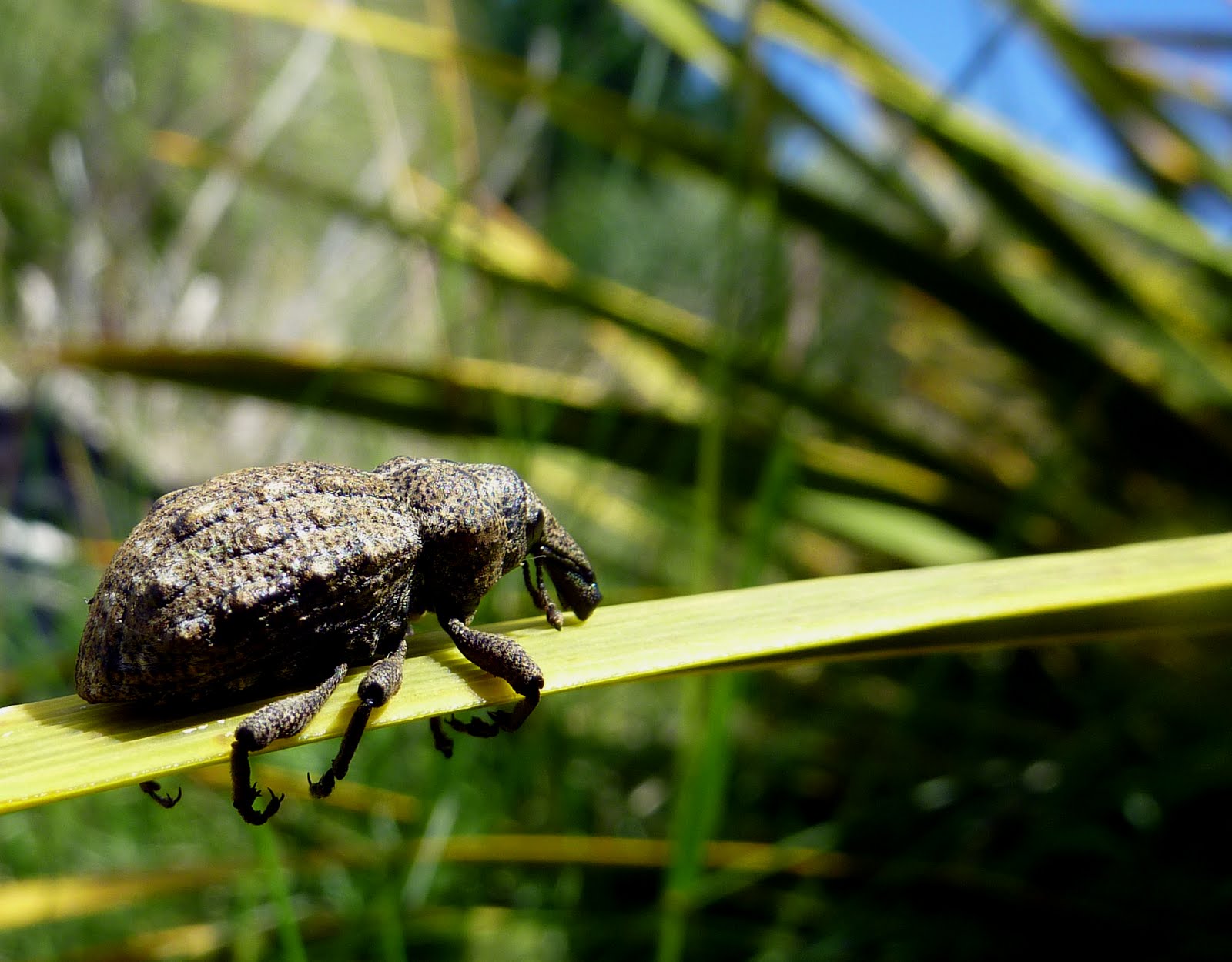 In 2004, in an unsuspecting sleepy town in South Canterbury, zombies rose from the dead. Headlines were dedicated to spreading the news, zoologists world-wide were excited, all due to the rediscovery of a species thought to be extinct for 82 years! Wow, like the takahe? Well, maybe: a weevil. It may be smaller than the charismatic species we are used to hearing about, but no less important.

Despite the fact that specimens are located in history museums around the world, the endemic Canterbury knobbled weevil (Hadramphus tuberculatus) had not been seen alive for 82 years. To everyone’s great surprise, it was rediscovered in Burkes Pass in 2004 by Laura Young while she was studying for her Masters degree. It is currently one of New Zealand’s most endangered invertebrate species. The news at that time exclaimed how four specimens were found (and consequently pinned and archived). But what happened after that? Were there any survivors? Lincoln University researchers and students were quickly hot on the trail of this elusive large, flightless knobbled critter to find out.

Following the rediscovery, conservation efforts to save this species have been impressive, especially when we know so little about the species. Sampling measures have mainly included the use of pitfall traps and visual searches of the speargrass species that the weevil is known to primarily feed on (speargrass, or Spaniards, are species of Aciphylla, a famously spiky New Zealand plant in the carrot family). These efforts located more weevils within a second site on farmland across the road from the location of the initial rediscovery. However, until this last summer, all past efforts found very few additional weevils in either area. The summer of 2007–2008 recorded just six specimens; five located on Aciphylla, one in a pitfall, and the 2008–2009 summer returned no weevils at all. Thankfully, the past season (summer 2009–2010) found 49 weevils, the majority of which were recorded in the original area and all bar one were caught in pitfall traps.

Emily Fountain, a Lincoln PhD student currently studying the weevil, has hypothesised that the reasoning for these vast differences in weevil numbers between years is due to the ecology of the speargrass. Many threatened New Zealand birds put much more effort into breeding during the years their food plants flower heavily (“mast-seeding”). In contrast, Emily thinks that knobbled weevils are easiest to catch in years of poor flowering. Last summer very few plants flowered. Emily proposes that this caused a weevil mass movement, interplant dispersal, to locate more food resources that resulted in a very successful pitfall trap count. The previous two summers were good flowering years so the weevils are thought to not have needed to move around so much. This may be why the few specimens that were found were mainly located on the speargrass plants rather than between them.

Environment Canterbury and Department of Conservation staff in Twizel have both been frantically trying to protect the weevil and its habitat with the use of rat, stoat and hedgehog predator control since its rediscovery in 2004. Lupin spraying and the decapitation of wilding pine seedlings has also been a priority to stop competition with speargrass. The future conservation efforts for this species may include translocations, but this will only be once Emily’s research into the genetic health of the current population is completed. This research will allow us to see if the species is genetically stable enough to survive in additional populations. Until this time, a booklet has been released by Mike Bowie (Lincoln University) to inform farmers, and the general public, on what they can do to help locate more weevils and how they can aid in the species conservation. If you find a large knobbled weevil on a speargrass in Canterbury or Otago, please contact Mike.

Although the Canterbury knobbled weevil is, well, a weevil, its rediscovery was a significant event in New Zealand’s history. It reignited the awareness in the general public about the importance of the lesser known species. It also provides hope for other ‘extinct’ species that may be out there somewhere, still managing to survive under the radar of human detection, waiting for their chance to walk, or crawl, among the living again.

This blog post was written by postgraduate student Vanessa Lattimore as part of the course, Research Methods in Ecology (Ecol608).

Posted by Vanessa Lattimore at 10:08 AM No comments:

The origin of the Chatham Islands’ flora 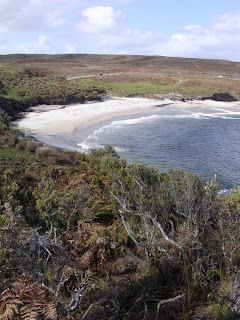 The Chatham Island archipelago lies over 800 km to the east of mainland New Zealand. There are two major islands, Chatham and Pitt, and several smaller islands. Humans have lived on the islands for a few hundred years. There is a good level of diversity of species in the archipelago. For example, there are about 410 plant species, subspecies and varieties present although the vast majority are the same as mainland New Zealand species. There are 36 endemic plant species (species only found on the Chathams), including 17 trees and shrubs and 11 herb species. A recent study led by Peter Heenan (Landcare Research), with Anthony Mitchell (University of Otago), Peter de Lange (Department of Conservation), Jeanette Keeling (University of Auckland) and Adrian Paterson (Lincoln University) has used molecular methods to look at the evolutionary history of these endemic plant groups. Their work has now been published in the NZ Journal of Botany. In this study the group analysed 35 endemic species and their separate closest relatives using information from several gene regions to estimate evolutionary relationships and time since last common ancestor for each group.

Not surprisingly, the vast majority of species had their closest relatives on the New Zealand mainland. It had been argued that most species colonising the Chathams would have originally come from northern New Zealand but this was not supported. Rather, closely related species were often those that were widespread around the mainland, perhaps indicating their ability to colonise successfully. Most of the speciation of Chatham species has occurred as allopatric speciation where the colonising population has since become isolated from mainland populations. Only six species pairs appear to have arisen within the Chathams themselves (from the genera Aciphylla, Coprosma, Hebe, and Olearia) and this speciation may be driven by niche differentiation into wet and dry habitats. These results are all consistent with the isolation of the Chatham Islands and the predominant winds and currents moving from the west (New Zealand) to east (Chathams) making it easy to colonise the Chathams but difficult to get back to the mainland.

The age of the endemic Chatham flora was investigated using molecular clocks. First, 14 species showed virtually no DNA divergence when compared to their main 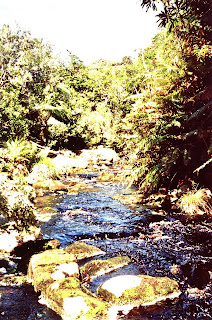 These results fit well with what we know about the geology of the Chatham Islands. The Chathams have a long history. They were part of Gondwanaland and then Zealandia (as seen by terrestrial dinosaur bones found on the islands). However, most of the last 60 million years have been spent underwater with short periods of volcanic island building. In recent times, the Mangere volcano produced land about 6 million years ago which had largely sunk again by 4 mya. The Rangitihi volcanics raised land about 2-3 mya and land has persisted since then. The plant evidence certainly supports this idea of most plant species arriving in a newly emergent land over the last two million years. Coupled with the fact that about 350 plant taxa are identical to mainland species, these findings support the idea of a young flora and the hint at the tremendous power of long distance dispersal and colonisation to establish diverse biotas on isolated oceanic islands.