Ecologists spend a lot of time thinking about how species in communities are linked together. While we have made progress in understanding this at small scales (like your backyard) we have seldom tried to understand this at large scales (like across continents). One of the reasons for this is that there are huge numbers of species in communities and the problem of dealing with them all is too difficult. However, some communities are not so complex. Hannah Buckley (Lincoln University) and her colleagues, Thomas Miller (Florida State), 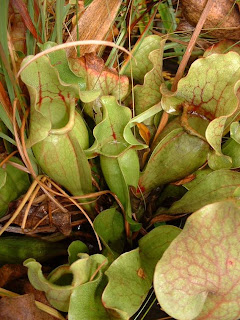 Aaron Ellison (Harvard) & Nicholas Gotelli (Vermont), realised that there are some communities that are easier to study. In a paper published in Global Ecology and Biogeography, the team looked at communities that live with pitcher plants over much of North America. Pitcher plants collect rainwater in their leaves and these pools are colonised by species of bacteria, insects and so on. The pitcher plants create a simple community that can be investigated at a several scales: different pitchers (or cups) within a plant, different plants within a local population, and across the plant’s entire distribution (continental scale).
The pitcher plant Sarracenia purpurea was the subject for their study and is a long-lived (> 50 years) carnivorous plant that grows in bogs, sand plains and pine savannahs across much of North America. The pitcher-shaped leaves are open to the sky and collect rain and snow as well as various species of animals and bacteria that happen to arrive in the cups. Many of the species, finding themselves trapped in the pitcher, drown and form the basis of a food chain on which other species feed who, in turn, provide food for predators. The plants are thought to absorb some nutrients, particularly nitrogen and phosphorus, from the decaying bodies.

Buckley collected the contents of pitchers from 39 sites across North America. When examined, across all sites, the researchers found 13 arthropod & rotifer species, 48 protozoan species and 29 bacterial morphotypes. Pitcher plants typically hosted 6 arthropod species, 9 protozoans and 17 bacterial species. Nearly half of the species found were only from one site, whereas 4 species that specialise in living in pitchers (three fly and one mite species), were found at almost all sites. Overall, and very surprisingly, pitchers at the same site were less similar to each other in species make-up 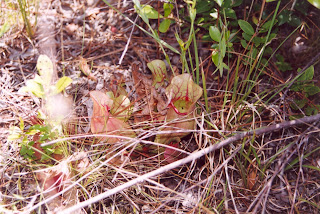 than comparing pitchers at different sites across North America! That is food webs, and therefore communities, were more variable at the smallest scale that at the larger scale. This is probably not as surprising as you would first think. For example, the streets in your home town can be highly variable as to the businesses that you might find there but if you compare between towns they will generally all have a pharmacy, a supermarket, a fish’n’chip shop, hairdressers, a joinery and so on. It’s all about the scale you ask your questions at. And that is the key finding of this study.
This study emphasises the benefits of examining how communities change at a variety of scales and should serve as a model for others. Buckley and her co-authors intend to use this idea of simple natural communities in future studies to examine the effects of local and continental scales on how biotic and abiotic challenges affect species richness and community membership.

Posted by Adrian Paterson at 12:02 PM