Darwin and the Sandwalk 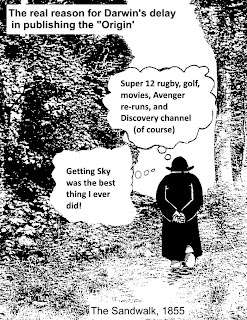 During the 1990s the Systematics Association of New Zealand was a very active science group with regular conferences and a membership of around 100. SYSTANZ was based around scientists who were interested in systematics (the science of working out evolutionary relationships. There is an old site for SYSTANZ which has a good definition of what systematics is. Earlier this decade, for various reasons, the association went into abeyance. During the 1990s I was lucky enough to be the secretary for the association and produced regular newsletters. One of the things that Cor Vink and I added to newsletters were a series of cartoons. One was themed around Darwin walking along the Sandwalk (the route he built at Down House to take some exercise and ponder). Many of them were based on finding reasons for Darwin's delay of many years in publishing the Origin. The other series was on a phylogenetic superhero called Unrootedtreeman. Rather than consign these to the bottom of filing cabinets throughout New Zealand forever, I will occasionally show them off here at EcoLincNZ. This is the first one that wonders what would have happened if pay for view TV was around in Victorian times....

Posted by Adrian Paterson at 12:20 PM