It's time to take a step forward

This blog post was written by postgraduate student Lauren Maciaszek as part of the course, Research Methods in Ecology (Ecol608). 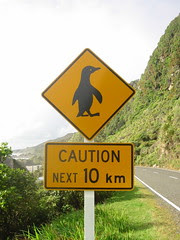 Penguin road sign in Westland.
Photo by Mollivan Jon
Kaka, kotuku, kea, kakariki, kokako, kereru, and kiwi. What do all of these have in common? Apart from providing some interesting alliteration and perhaps a bit of a tongue twister, they are all native New Zealand birds which are considered nationally vulnerable, threatened, or endangered. The Department of Conservation’s (DOC) 2005 Threat Classification System showed that 153 bird species were considered at risk, chronically threatened, or acutely threatened. Another 50 bird species might be at risk or threatened, but there was not enough information known to be able to classify them.

Conservation is a necessity in New Zealand, unless we want our surviving bird species to follow the moa, Haast’s eagle, and huia to extinction. The biggest challenge for conservation, both in the past and looking into the future, begins right in the middle of our capital city at Parliament – it’s getting funding. DOC’s already strained budget is being tightened again, and every cent for conservation needs to be spent as wisely as possible.

This is where more studies like the one done by Jonah Busch and Lincoln University’s Ross Cullen would be useful. Busch and Cullen used a panel data set of yellow-eyed penguin nest counts to analyse different recovery treatments and their effectiveness and cost-effectiveness (the study was published in the journal Ecological Economics in 2009).

Three recovery treatments were assessed. The first was trapping, in which traps were laid out to kill predators. The second treatment was revegetation, in which appropriate plants were planted to provide shelter for the penguin and provide better breeding conditions. The third treatment was intensive management, which involved an on-site manager who cared for sick or injured penguins and managed nest boxes. The site manager also used trapping and revegetation, so this method is essentially a combination and enhancement of the other two methods.

Using the data from the different sites, Busch and Cullen then used econometric techniques to analyse how effective the treatments were, by focussing on the population growth rate over time. They also allowed for other factors which might impact their results, such as time lag between the treatment being implemented and beginning to have an effect, and the presence of the Hooker’s sea lion.

The results of the econometric analysis showed that only one of the treatment methods, the intensive management, was responsible for a significant increase (about 9%) in yellow-eyed penguin nests over the period of time (13–15 years) that the data covered. This shows that both the trapping and revegetation treatments are not particularly effective on their own, and that money spent on these treatments alone could be money unwisely spent. The cost of each additional nest gained through intensive management was also calculated, with the final cost shown as about NZ$68,600. The study also concluded that the intensive management was the only cost-effective method, because it was the only method that was effective.

Ross Cullen stated that he “would warmly support similar studies being completed on other New Zealand threatened species”. These studies would better inform conservation managers in New Zealand about how to spend their budget, and provide them with an idea of the outcomes that are likely to be reached with the money spent. However, Cullen also points out that similar studies would require time series data collected from a number of sites, and that this might only be available for a few species.

Perhaps, then, it is time to start collecting more data. Information is power, and when monetary power is restricted by budgets and forced into trade-offs between conservation efforts, it seems to me that it’s best to have all the information we can get. The way I see it, the study runs an analysis on a set of already collected data – that means no extra cost, time, or disturbance to the animals, and the data is also being used by others (such as DOC). This could be the beginning of a large step forward in conservation management. After all, what have we got to lose?