Figuring out which animals are present in an area can be a difficult task. We often need to count local populations of endangered or pest species or check to see if certain individuals are present. Sometimes we can simply go out and count but often the terrain makes this impossible or the presence of a human can affect the behaviour of the animals of interest, by scaring them away. There are several methods that can record the presence of mammals. In New Zealand, for example, we use tracking tunnels where small mammals leave their inky footprints, 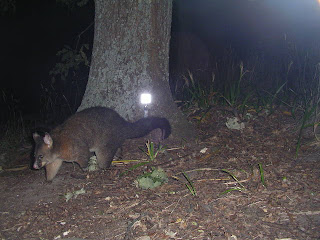 waxtags where curious individuals leave bite-marks and various kinds of traps where the animals leave themselves. A method rapidly gaining in popularity is the camera trap, where animals leave their image. Basically cameras are left in the field and are activated by either an animal breaking a light beam or by entering an area where a motion detector alerts the digital camera. Images of the animals are then saved to memory and can be downloaded for further analysis. A difficulty with camera traps is that they often are placed in dim environments, forests for instance, and of course, mammals are often very active at night. So camera traps need some kind of flash in order to capture a useful image. For many years infra-red flashes have been used. Most mammals do not see into the infra-red spectrum well and therefore should not notice that a flash has gone off. Of course there are downsides to infra-red, the images are in greyscale and are not particularly clear. It would be useful if an image could be taken in white-flash as greater detail would be recorded as well as colour. However, it is assumed that the sudden bright light would influence mammal behaviour, probably by scaring individuals off. More... In New Zealand, most of the mammals of interest, usually from a pest management point of view, are active at night. It would be very helpful if white-flash images could be used to help observe behaviour of species like possums where age, sex and individuals could be identified. 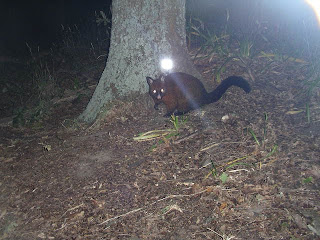 With this in mind, Shona Sam, a PhD student in the Ecology Department at Lincoln University and her advisor team (Shaun Ogilvie, Adrian Paterson, John McIlroy and Charlie Eason) have looked at the effect of different flashes on possum behaviour around bait stations. The brushtail possum (Trichosurus vulpecula) is a major pest species in New Zealand and a huge effort goes into controlling this furry plague. Common methods of control include delivering toxins in cereal biscuits at bait stations in areas with high possum densities. Understanding possum behaviour at bait stations is crucial to designing the best way to deliver these toxins. Do the possums fight each other at stations with the dominant possum restricting access to others? How long do they spend at the station? Do they visit several times a night? Camera traps are an ideal way to collect these data, particularly if white flash can be used. Shona set up her trial in a pine plantation in the foothills of the Southern Alps. 30 camera traps and bait stations were placed throughout the 700 ha study area with equal numbers of infra-red and white flashes. Each test was for 6 days at each site with cameras and baits being checked every second day. Shona found that there was no significant difference between the number of possums 'captured' by the different flash techniques. Likewise, the amount of time spent by possums at bait stations and the amount of bait taken did not differ significantly either. The results from this experiment, published in the Proceedings of the 24th Vertebrate Pest Conference, clearly show that using a white-flash will not affect the behaviours of interest in possum research at least. Shona is now using camera traps to further examine the nocturnal life of several of our mammalian pest species.
Posted by Adrian Paterson at 11:04 AM