Kiwi vision: the blind side

This article was prepared by postgraduate student Mortiz Schmid as part of the ECOL 608 Research Methods in Ecology course. 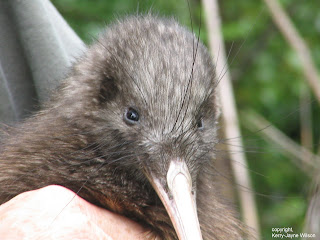 One of the basic principles of vision is that an eye which is supposed to maximize information gained at low light levels needs to be large. Information is gained through two cell types in the eye (cone cells for colour vision and rod cells for contrast) that detect and convert light into electro-chemical signals that can be processed by the brain structure. This poses a particular problem for nocturnal (active at night) flying birds since they need huge eyes in order to compensate for the low intensity of natural light and unfortunately large eyes are heavy. To be able to fly, there is always selective pressure (traits that are favoured by evolution) among birds to reduce their overall body mass.

What about kiwi?
We would think that as a nocturnal bird that is not subject to the mass constraints of flying, Kiwi would develop huge eyes. But they didn’t. This brings into question: Why?


The researchers looked at the eye, brain and bill structure and measured the visual field (the part of the sphere around the head the bird is able to see, Fig. 1) in two species of Kiwi. They discovered that Kiwi rely minimally on their visual sense, instead relying more on their olfactory (what they smell) and tactile (what they touch) senses. This situation is similar to some nocturnal mammals, but Kiwi and nocturnal mammals evolved these features independently. The researchers propose that the visual system of Kiwi has undergone an adaptive regressive evolution, meaning that through evolution, they have lost a highly developed visual system in favour of the other senses which became more developed. This regressive evolution may have been driven by the trade-off between the low amount of visual information that can be gained at low light levels and the energy costs of the processes involved.

Each structure that was investigated pointed clearly towards a bird that relies mostly on its olfactory and tactile senses, but not so much on its visual sense. On the one hand, the overall eye shape of Kiwi was similar to birds which are active during daylight. The visual field of Kiwi are the smallest yet reported, with a very small binocular area (where both eyes can see something), a relatively small monocular area (visible with one eye) and a very large area in which there is no vision, the blind sector. Comparison with three different species (Barn Owl, Emu and Pigeon) showed that Kiwi have by far the smallest optic nerve diameter (which transmits information from the eye to the brain) and the area of the brain devoted to visual information is virtually absent in Kiwi while they are very large in the other species. On the other hand, the nostrils of Kiwis are right at the tip of the bill. Here, there is also a high concentration of mechanoreceptors which detect mechanical cues that are produced when the bill touches something. In addition, brain centers representing tactile and olfactory processing are well developed. This information supports the idea that the bill is the focus for gathering olfactory and tactile information. Regarding the close relationship between Moa (with large eyes) and Kiwi (with small eyes), it seems plausible that the evolutionary step that led to a reliance on olfactory and tactile cues, which happened in Kiwi, was caused by the low light level on the forest floor. Where the costs of maintaining a visual system adapted to low light intensity was higher than the benefits which were gained by relying on olfactory and tactile cues. Here, the scientists were able to reveal this very important principle regarding kiwi vision which now can be included in all kinds of kiwi recovery projects and makes for a new perspective in kiwi habitat management.

Posted by Adrian Paterson at 11:43 AM