This article was prepared by postgraduate student Julia Bellemy as part of the ECOL 608 Research Methods in Ecology course. 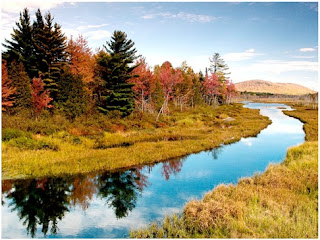 Freshwater streams display both temporal (time) and spatial (space) differences. Time variation is a result of seasonal influences and space variation is due to flow regime, substrate type, water solutes, suspended materials and incident light exposure. It is believed that bacterial communities are good indicators due to their rapid life cycle. However, if we can’t see them, how do we know that they are present and observe changes? Bacteria can be detected using Automated Ribosomal Intergenic Spacer Analysis (ARISA) which creates ‘fingerprints’ of microbial communities. The ‘fingerprint’ produced is just like a human fingerprint, because it is unique to a bacteria species just like a fingerprint is unique to a person.

So how is ARISA used to construct a ‘fingerprint’? Unfortunately, it isn’t as easy as dipping bacteria into ink and pressing them against paper. First, the DNA has to be extracted from the cells and then DNA sequences are identified for each species. The length of the gene region varies between different species and this difference in length allows a unique ‘fingerprint’ to be constructed for each species.

In the study “Spatial and temporal heterogeneity of the bacterial communities in stream epilithic biofilms” conducted by Gavin Lear from Lincoln University, the time variation in biofilm communities was analysed over a range of spatial scales. It was expected that the main study site, Cascade Stream, located within the Waitakere Ranges, west of Auckland, New Zealand, would have uniform water chemistry characteristics. Interstream variability was also assessed using samples from a second stream. It was hypothesised that there would be no significant bacterial variation on a spatial scale and that the temporal variation in the two streams would be similar.

The study found that the differences in bacterial communities were greater between streams than within the same stream. Significant spatial variation observed in the principle study site suggests that the hypothesis stating that there would be no significant bacterial variation on a spatial scale must be rejected. Greater variation was observed on the same rock than between sections of rocks and this indicates that reduced community similarity with increased physical distance was not observed.

Now that we know that both spatial and temporal variation were observed we need to know why. The study concluded that water temperature and irradiance had the greatest influence on the bacterial communities. The most significant variation occurred when the warmest air and water temperatures were recorded.

In conclusion, ARISA was successfully used to determine spatial and temporal variation in bacterial communities in a freshwater stream with temporal variation having the most significant effect. Water temperature was identified as causing the greatest variation. Overall, the use of bacteria as indicators of freshwater ecology looks promising and should prove to be a sensitive technique of understanding the effects of human activities on freshwater systems and monitoring remediation strategies.

Posted by Adrian Paterson at 1:18 PM