Mothbusters! The importance of forest fragments in nature conservation

This article was prepared by postgraduate student Elise Arnst as part of the ECOL 608 Research Methods in Ecology course.

New Zealand has vast areas of highly modified and fragmented, disconnected landscapes. It is important for the conservation of biodiversity to understand the ecology in these modified, human-dominated landscapes. Urbanised areas and farmland both tend to be on low-lying land that is high in nutrients and resources and previously supported biodiversity hotspots. Remnants of native forest are rare pockets of once widespread species and are important in conserving biodiversity. Both remnants and restored native vegetation are important in the conservation of other native species, such as invertebrates. To maintain and increase 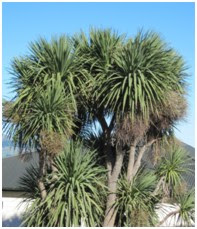 biodiversity we must build on such remnants by restoring native plant species in altered habitats.
Landscape-scale patterns in fragmented areas provide an important understanding of the ecological processes driving invertebrate distribution and abundance. In New Zealand there are many small patches of native trees, which are not joined to a larger patch of forest making it difficult for invertebrates to move between areas to find food or a new habitat. These patterns have been explained by Ruth Guthrie and two other Lincoln University scientists, Hannah Buckley and Jon Sullivan, in their study of cabbage tree (Cordyline australis) damage by the larvae of the endemic moth Epiphryne verriculata Feld (Lepidoptera: Geometridae) in Christchurch, New Zealand.


Studying cabbage tree herbivory has helped to explain the abundance and distribution of E. verriculata. The larvae eat only cabbage tree leaves (i.e. they are monophagous), which means its ability to survive is dependent on the presence of the cabbage tree. This also means that the clearly identifiable damage on cabbage trees is a straight-forward way to determine the abundance of the moth larvae. Herbivory was measured by Guthrie et al. (2008) as the percentage of damaged leaves on a cabbage tree crown. Herbivory was seen on almost all trees across all sites, indicating a widespread presence of the moth in both natural and modified areas. Damage was higher in adult trees, this is likely to be because they provide a larger food source. Herbivory was also higher when few other cabbage trees were in close vicinity, which is a likely to be result of the moth larvae being monophagous – fewer cabbage trees means they will do more damage to less trees. The skirt of dead leaves on the cabbage tree was thought to be a refuge for adult moths but the presence or absence of a skirt appeared to have no impact on the level of damage. This may indicate that larval abundance is more dependent on the availability of food rather than suitable habitat for adults. The abundance and distribution of E. verriculata can help to explain more complex landscape-scale patterns.
There appears to be a pattern across the Canterbury Plains where endemic herbivorous invertebrates are present on their host plant regardless of landscape fragmentation. In the study by Guthrie et al. (2008) this was confirmed as larvae were found on cabbage trees in all landscape types. The widespread presence of larvae indicates that the availability of suitable host tress is the determining factor for the E. verriculata moth to be able to survive in an area. Native trees in both restored and urban areas provide potential habitat and food sources for invertebrates. This emphasises the significance of native flora in modified landscapes for maintaining invertebrate diversity, providing strong motivation to ensure we continue to promote native biodiversity through restoration in modified areas.
Guthrie, R.J., Sullivan, J.J. and Buckley, H.L. 2008. Patterns of host damage by the cabbage tree monophage Epiphryne verriculata Feld (Lepidoptera: Geometridae) across urban, rural and native forest habitats. New Zealand Entomologist 31: 77-87.

Posted by Adrian Paterson at 10:24 AM