Humans like to put things in boxes, name them, groups similar things together, impose order on chaos and generally make the world a tidier place. This is very much the case in biology where we seek to put names to species so that we can then make sense of a complex, living world. Unfortunately, the living world is not always so black and white. For example, there are times when groups look different to one another, and are called different species, but they still can successfully mate (or hybridise). 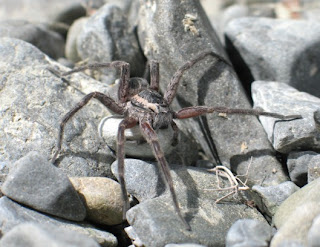 Such a situation may occur in the last stages of speciation, as it takes numerous generations for new species to fully diverge. Repeated crossing of hybrids with parent species is termed 'introgression' and this can often have negative impacts on the parent species, such as removing local adaptational traits. Because of these impacts, organisms usually have traits for avoiding mating with hybrids or members of closely related species. Luckily, introgression does leave its mark on an organism's DNA and can be readily detected. One group of organisms with a history of introgression is the spiders.

Within New Zealand there are four species of Dolomedes, a genus of large spiders spread around the world. Dolomedes aquaticus is found among the stones of braided riverbeds and D. minor in grass and scrub areas as well as swamps and other wet areas. Although individuals from these two species often come into contact and have the potential for interbreeding to occur, a study by Vink and Duperre found that this did not happen throughout New Zealand. Everywhere, that is, except the southern end of the range that they sampled where there was the suggestion of introgression occurring. Following up this study was the task for honours student Vanessa Lattimore with here supervisors Adrian Paterson, Rob Cruickshank (both Department of Ecology, Lincoln University) and Cor Vink (LU Entomology Research Museum and AgResearch). Vanessa sampled from braided rivers throughout the southern South Island of New Zealand and obtained Dolomedes specimens from 13 locations. She then examined a nuclear gene (actin 5C) and a mitochondrial gene (COI) for evidence of introgression.
Evidence for introgression was found with three haplotypes (versions of a gene region) from D. aquaticus being present in D. minor and this was recently published in Invertebrate Systematics, where it made the front cover! (Although I didn't buy 5 copies for my mother) Interestingly, there was no evidence for movement of genes from D. minor to D. aquaticus. 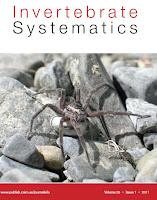 Why is the introgression only occurring in one direction? Because of the way that mitochondrial DNA is inherited, the most likely reason is that males from D. minor are willing to mate with females of D. aquaticus whereas D.aquaticus males are either too big (they are much larger than D. minor males) or more picky than D. minor males. The geographical pattern of the three haplotypes are also different which suggests that these introgression events have happened at different places and probably at different times. A major question to arise out of this research is explaining why the introgressions occur in southern braided rivers and not elsewhere in New Zealand. The authors suggest that as braided rivers are prone to variable flows (from no flow to floods in short time periods) that D. aquaticus may be forced into the surrounding vegetation where D. minor are found from time to time.

Posted by Adrian Paterson at 2:37 PM