This article was prepared by postgraduate student Nick MacDonald as part of the ECOL 608 Research Methods in Ecology course.
For those of you who have ever ventured beyond the boundaries of buildings and urban assemblages you would at some stage be greeted by one of Mother Nature’s miracles of aviation. I am referring to the New Zealand Hover fly (Melanostoma fasciatum) which can often be seen hovering, acrobating and nectaring at flowers around New Zealand’s natural environments. So what are these busy little creatures? What are they doing and where do they go? 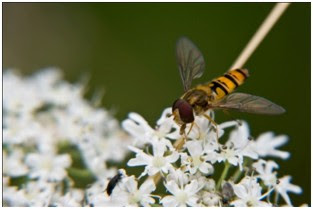 Hoverflies are members of the insect family Syrphidae. They can vary in appearance depending on species and despite their black and yellow striped mimicry of wasps, are harmless and share a unique relationship with humans. Gardeners consider themselves lucky when they are blessed with the presence of hoverflies. This is because at a larval stage, they are predators and prey upon pest insects such as caterpillars, aphids and other small insects. When larvae get close to prey they strike grabbing hold of them with their mouths and suck them dry. Adult hoverflies are herbivorous feeding on the nectar from grass species and Dandelions. They are also expert fliers hovering, manoeuvring and in some cases walking from flower to flower collecting pollen. They are considered to be, along with bees, an important pollinator of New Zealand’s flowers.


Field boundaries such as hedgerows and fence lines can impede hoverflies ability to pollinate. In a 2003 study, Field Boundaries as Barriers to Movement of Hover Flies(Diptra: Syphidae) in Cultivated Land by Wratten et al, the extent to which field barriers impeded hoverfly movements was analysed. The study used four types of field boundary with varying permeability in each replicate. The boundary types were: post and wire fences, poplars with gaps and dense poplars. Lacy Phacelia or Phacelia tanacetifolia, a plant with nectar rich flowers, was planted on one side of the four boundary types. Five yellow traps were placed on either side of the Phacelia, this provided a trap line on either side of each boundary. Hoverflies found in traps with Phacelia pollen in their guts were collected and counted. This enabled scientists to see if the permeability of a boundary would impede hoverfly flight movements between the Phacelia in each replicate. 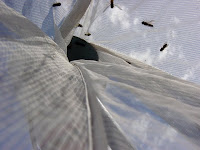 Results showed that the type of boundary does have an effect. Less permeable boundaries, for example, the dense poplars had the lowest proportion of hoverflies in traps, post and fence boundaries had the highest proportion and poplars with gaps were in between. The ability of hoverflies to fly through boundaries and pollinate flower is directly influenced by the permeability of boundaries. Other studies such as: Interacting effects of landscape context and habitat quality on flower visiting insects in agricultural landscapes by David Kleijn and Frank van Langevelde, 2006, point to the importance of landscape context for hoverflies; the abundance and richness of hoverflies depends upon the quality of the habitat patches.
So, what does this mean for hoverflies and for us if we continue to erect impermeable boundaries? It would not be a stretch of the imagination to conclude, that there could be environmental implications for New Zealand. If we reduce hoverflies ability to gather food this could reduce their population numbers and lead to a decline in the pollination of New Zealand’s flowers. It could also, diminish larvae numbers and dilute their role as a bio-control mechanism. This could increase the need and use of pesticides and insecticides on our foods. Plants have evolved in conjunction with hoverflies and are dependent on this complex relationship. I suggest that we adopt a mindset that takes permeability of field boundaries into consideration. We could erect boundaries that work with hoverflies, not against them. After all they are here to help.

Posted by Adrian Paterson at 2:55 PM