It's thieves, not killers, that you should worry about!

You know, just once I would love to see some ecological research that found a really simple answer that explained the phenomenon under study. Alas, we live in a complicated world where it is difficult to make robust predictions. I guess it keeps us ecologists in jobs. For example, possums are the biggest pest species in New Zealand wild areas, controlling their numbers must be a good idea. Introduced stoats are a devastating predator in most of our ecosystems, again controlling them must be the best thing to do? Turns out that (surprise, surprise) it's just not that simple. There is the cliche that 'nature abhors a vacuum' and that applies to ecosystems as well. Remove a species from a local area and suddenly a different species has a new opportunity. The remaining species might benefit because you have removed its main predator and so numbers will boom (called mesopredator release) or because you have removed a competitor for resources and so numbers will boom (mesocompetitor release). 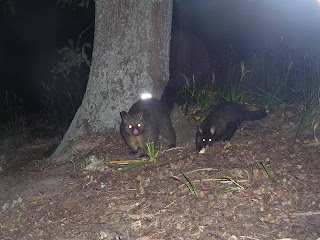 Wendy Ruscoe from Landcare Research and a host of authors, including Richard Duncan from Lincoln University have examined the issue of meso-release in New Zealand ecosystems where there is a complex interplay of introduced pest species that degrade the natural ecosystems. There work has just been published in Ecology Letters.

The group worked in forests of the North Island of New Zealand where they looked at interactions between a top predator (the stoat), two mesopredators (rats and mice) and an omnivore (possum). These are all species that are often controlled to reduce population numbers. (Note that in New Zealand the word 'control' generally means 'kill'). The team set up areas of stoat removal, possum removal, possum and rat removal and a control with no removal. Populations in the areas were assessed before and after control operations. The results were convincing. The removal of stoats (a top predator) caused no response in the two mesopredators (mice and rats). The removal of the omnivore (possum) released rats and their populations grew. The removal of rats led to a growth in mice numbers. The net result for the ecosystems was that removing possums and rats (while useful in the short term) probably had little long term benefits as other competitive species filled the void and continued to cause problems for the native biota. The lack of an impact from the removal of the predator was of great interest and suggests that competition, not predation, is the important process that shapes communities. So wildlife managers need to think in terms of multi-species control if they want to effectively manage ecosystems in the long term. Which is a reasonably non-complex answer for a complex process!
Posted by Adrian Paterson at 5:00 PM