You are what you eat and this applies to snakes as well as people. We have just been through student orientation and as I cycle around the streets of Lincoln I could make a study on the diet of students by what they leave behind. Empty pizza boxes and beer bottles lie about and occasional patches of vomit tell a sorry tale of drinking and eating diced carrots. In much the same way, and far more interesting, we can find out about more exotic species than Homo studentis by looking at their detritus of eating. Tropical pythons, such as the scrub (Morelia kinghorni) and carpet (Morelia spilota) species, are spectacular species of snakes that live in Northern Queensland in the wet tropics. For various reasons (most to do with the fact that they are Big Giant Snakes - M kinghorni can reach 8 m and M spilota, while suffering from small python syndrome, still reaches 2.5 m) these species are little studied and this includes their diet. Given that diet is an essential component of a species ecology this is an important oversight. 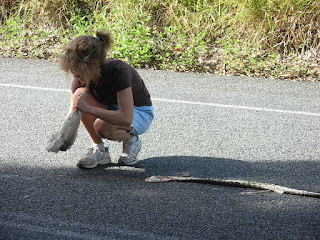 Jennifer Fill (University of South Carolina, pictured with a roadkill carpet python), Alastair Freeman (Queensland Parks and Wildlife Service and former Lincoln University postgraduate and ecology technician) and Tim Curran (Lincoln University) along with several undergraduate students at the School for Field Studies in Queensland have investigated the diet of the scrub and carpet pythons. How does one go about sampling the diet of large and dangerous animals? Obviously, carefully. Pythons were being caught as part of another study which placed transmitters on the snakes in an attempt to follow where the snakes go when they move around the local habitat. While being handled, the pythons would occasionally defecate or regurgitate and this would provide a sample. Pythons are also susceptible to being hit by cars as they cross roads and individuals killed in this manner could be dissected and the stomach contents examined.

In a paper published in Herpetological Review (43:30-34), the scientists report on samples from 23 scrub and 29 carpet python samples collected over the last decade. Not surprisingly, scrub pythons took the larger prey with Agile wallaby (15 kg) the biggest. The most common prey items for the scrub python were the red-legged pademelon (4.6 kg) and the long-nosed bandicoot (1 kg). Other items of interest were brushtail possums (2.9 kg, which makes a Kiwi happy), a domestic cat (4 kg) and domestic chickens. Carpet pythons took smaller prey, the largest being Northern brown bandicoot (1.6 kg), the most common the house mouse (0.016 kg) as well as several species of other rodents and marsupial mice. Both species took a mixture of native and exotic species and seemed to use both natural and modified habitats (indeed one carpet python with a transmitter spent time in the roof space of the house of one of the scientists!). 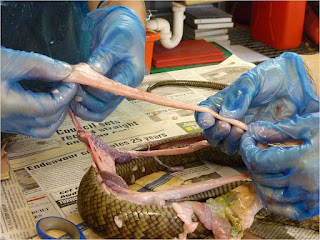 This research provides the basis for future research on foraging ecology and predator-prey relationships for the python species. For example, given the occurrence of rodents in the diet of the pythons, do they play role in restricting pest numbers in an area? The study also shows the value of using some of the biological detritus that we see around us. Maybe I should be thinking of the student rubbish as a possible study a bit more seriously....

Posted by Adrian Paterson at 4:15 PM