A decade or so ago I taught into a course on Wildlife Management here at Lincoln. One of the things that I would do with the class was to ask them a few questions. One of the questions was "Which is the lesser of two evils: rushing in to save a species even if we are not sure that the intervention will be positive for the species OR waiting until we have researched our method to be absolutely sure of the benefits and problems of the method but possibly being too late to conserve the species?". Probably not surprisingly, given the class was of an active conservation bent, rushing in too soon was overwhelmingly supported over waiting till too late. This result was always handy for me as I spent the next few lectures railing at the problems caused by the gumboot brigade who act before they think. Sadly that course is no longer with us, itself a victim of a pre-mature culling. I was reminded of this course when reading a new paper by Des Smith, a post doc in the Centre for Wildlife Management and Conservation at Lincoln University, and his colleagues, mostly from Calgary Zoo and its associated entities. Des has been directly involved with conservation for the last 15 years. I'm not sure how Des would have answered my question. Des is definitely a do-er but he also is a thinker. . 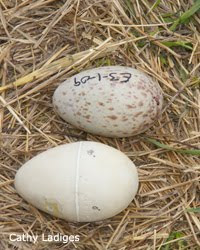 One of the conservation strategies that he has thought long about is artificial incubation. Worldwide, over 150 endangered bird species are bred in captivity where they add to wild populations and help maintain captive stock. Notable species in New Zealand are black stilt and Campbell Island teal. One of the advantages of captive breeding is that eggs can be removed from breeding pairs and put into incubators. The 'loss' of a clutch of eggs often stimulates parents to lay another clutch. Thus, multiple clutching is a useful method for producing high numbers of eggs. Multiple clutching has been a useful method for species, like takahe, in building up wild populations quickly. What Des and his colleagues wondered though, was how similar are incubators to actual nests? To answer this question they developed the 'archive egg'.


The archive egg was built to be the same size and shape as their endangered species, the world's rarest crane - the whooping crane. Packed into the archive egg were sensors for measuring temperature, humidity, light, and position (whether the egg is moved around). Armed with their spy egg, Des and co placed the egg into whooping crane nests (and sand-crane nests, as these birds are sometimes used as surrogate nests for whooping crane eggs) as well as three commonly used brands of incubators. The archive eggs were left for 30 days to gather data. As spies the archive eggs worked well. They successfully infiltrated the nest as the birds were happy to treat them as if they were their own eggs. From here their covert operation began. Were artificial incubators similar to real nests? Well, not so much. Crane nests were cooler as they were maintained at about 32oC whereas incubators were around 37oC. Humidity in crane nests varied hugely over time whereas it was kept at very similar levels in an incubator. Finally, in crane nests, eggs were turned such that all parts of the egg spent time face up. In incubators, turning the eggs only resulted in a few points spending time face up. So overall, real nests were cooler, more variable in humidity and better at turning eggs than artificial incubators. 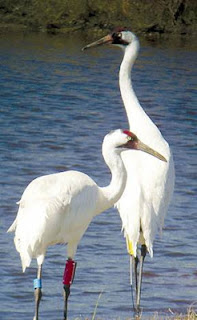 A major difficulty of captive rearing programmes for endangered bird species is hatching failure. A lot of time and resources go into captive rearing and yet the hatching rates are usually less than that of a real nest. The archive egg data suggests that a reason for this decline is that incubators, although better than nothing, are not as good a stand-in for parents as was thought. Using data from the archive eggs will allow researchers to fine tune incubators to the particular needs of an endangered species so that hatching success is similar to or may even exceed that of natural nests. This research shows the value of taking time to find out about a system. Let's hope that more eggsperts take it on board!

Posted by Adrian Paterson at 5:22 PM

Very interesting article. As a wildlife biologist, I learned that wildlife managers were more successful when they closely replicated nature in their projects. Even then introduction of incubated birds has mostly been unsuccessful. It seems that some species of birds lose their natural instincts when artificially reared. We attempted to hatch a large variety of "game" birds in incubators and release them into prime wild habitats. Many millions of individuals of several species were hatched and released into good habitats. The vast majority of these efforts were total failures. I hope the efforts for whooping cranes are different. We must continue to try.