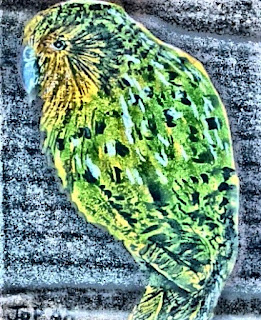 In conservation research you sometimes get the feeling that some species just seem to want to go extinct. No matter what you do for a species there seems to be a further quirk of their behaviour or physiology that just makes conserving them even more difficult. Take the kakapo. This big, flightless parrot from New Zealand was once extremely common. One just has to drive around the countryside to see numerous Kakapo Creeks and so on. Habitat modification and introduced predators were devastating to this species and the last remnants of this species were gathered up in the 1980s and taken to the protected safety of islands like Codfish Island (or Whenua Hou) off the west coast of Stewart Island. Here there were few threats and reasonable levels of food. A year-round presence of Department of Conservation researchers could monitor individuals and ensure survival of their chicks. But there was a problem. The kakapo didn't seem to want to breed! A great deal of research went into figuring out what was holding the kakapo back. Was it a result of inbreeding as their populations had dwindled down to a handful of individuals? Was it a result of their complicated 'track and bowl' breeding display areas and lekking mating system? It turned out that much of the problem was the result of food. Kakapo females tend to move into reproductive mode in years of mast fruiting of rimu. Unfortunately rimu does not produce fruit every year, hence the kakapo females don’t breed every year. This seemed to be the answer until it was noticed that even in fruiting years many females were nonreproductive. The variation in female breeding activity was studied in more depth by Jo Whitehead (Department of Conservation and former Lincoln postgraduate student) and Brad Case, Kerry-Jayne Wilson and Laura Molles from Ecology at Lincoln University.

In a paper published in New Zealand Journal of Ecology, the team detail their research done on the kakapo population of Codfish Island. Eighteen breeding females were monitored over the years 2005 and 2006. All birds had fitted radio transmitters that allowed them to be located in the thick bush present on the island. Repeated fixes of locations over the two years allowed the researchers to estimate the home ranges for each of the individuals (areas in which the birds spend most of their time). The researchers also performed a detailed habitat analysis where they recorded what plant species were present within a home range, especially the abundance of rimu. Home ranges generally did not overlap and varied a great deal in size as well as in the type of vegetation found in the range. The amount of rimu also varied a great deal from home range to home range. In 2005 there was a low-rimu-mast-year with only minimal fruit being produced and only some of the females bred. Whether a female bred or not depended on the size of their home range (larger home ranges were better) and the quality of the home range (how many rimu and other fruiting trees it contained). So the research showed a close link between the amount of food available to female kakapo and whether they made it to breeding condition. 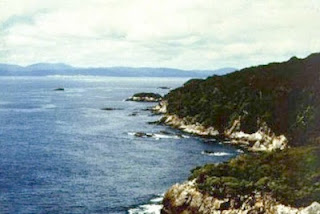 There were some valuable outcomes from this research. The researchers were able to develop a habitat quality map of Codfish Island for kakapo. They were also able to identify females in low quality habitat who might be good candidates for future translocation to islands with areas for food-filled home ranges. These advances allow more of the female population to take advantage of mast years and should boost the growth in the kakapo population.
.
Posted by Adrian Paterson at 11:26 AM