New Zealand ghost moths: the results from a molecular phylogeny

This blog post was written by postgraduate student Hamish Patrick as part of the course, Research Methods in Ecology (Ecol608). Hamish revisits a Lincoln University study on New Zealand moth evolution published in 1999 and assesses the progress made since then.

Hepialidae commonly known as ghost moths are a family of moths distributed throughout the world. There are 27 species of ghost moth present in New Zealand all of which are endemic. These include New Zealand’s largest moth: the puriri moth (Aenetus virescens), several pasture pests in the genus Wiseana as well some species with flightless females that use pheromones to attract males. Click here to learn more about our unique ghost moth fauna. 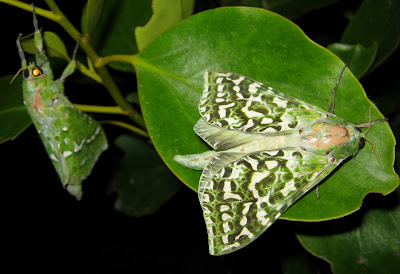 Two male puriri moths (Aenetus virescens) in the Hawkes Bay. These moths had a wingspan of over 10 cm but the females which are not seen as often are nearly double that size. Adult ghost moths have very short lifespans due to them having no mouth parts, but some species such as the puriri moth can spend a number of years as a caterpillar. (Photo: Hamish Patrick)

The first DNA analysis of the New Zealand ghost moths was completed by Barbara Brown, Rowan M. Emberson and Adrian M. Paterson of Lincoln University in 1999 and has changed the way we think about the New Zealand ghost moth fauna.
More...
For this project ghost moths were collected using light traps before two mitochondrial genes: COI (commonly known as the DNA barcoding region) and II were sequenced. The resulting phylogenetic tree was very similar to previously constructed trees based on morphology and allozymes (a kind of enzymes). However, there were a few differences between the two, particularly in the ‘Oxycanus’ lineage (which contains 13 New Zealand species). The main differences were in the genus Wiseana, where additional haplotypes (distinct DNA sequences) were identified for three species. Morphological features could not be found to support all the Wiseana haplotypes highlighting the difficulty in identifying the species in this economically significant genus. This may explain why the feeding behavior and other traits can vary in what was previously thought to be one species based on morphology, which is very important information for the control of these pest species.
The New Zealand ‘Oxycanus’ came out as the sister group to the Australian ‘Oxycanus’ which were included in this study; and an estimate on time divergence between the Australian and New Zealand members of this lineage revealed that the New Zealand species had split from their Australian relatives around 3-4 million years ago (MYA). This indicates that they dispersed to New Zealand rather than remaining here since the breakup of Gondwana over 80 MYA. The evolution of the species within Wiseana was found to have occurred around 1-1.5 MYA coinciding with the uplifting of the Southern Alps and other Ranges that are thought to have created new sub alpine and tussock grassland habitats for these species. Although the idea of moths making their way from Australia to New Zealand may sound odd, there are in fact a number of Australian moth and butterfly species that are regularly blown to New Zealand from Australia including the blue moon butterfly. 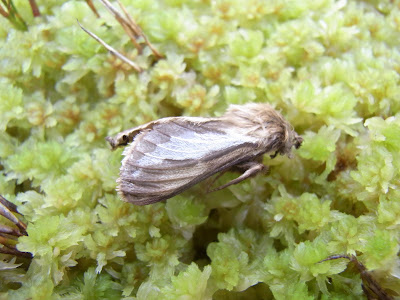 A Male Heloxycanus patricki (a member of the ‘Oxycanus’ lineage) sitting on its sphagnum moss host in Southland. Adults of this species emerge only once every two years which is thought to have contributed to it being discovered recently, in 1979. (Photo: Hamish Patrick)

Barbara Brown and colleagues’ paper has been cited 20 times since publication according to the web of knowledge including in a number of similar studies on invertebrate phylogeny and taxonomy such as spiders and butterflies. It has been cited in a number of papers on biogeography including a large study of the origin of the New Zealand terrestrial fauna where it was used along with many other case studied to disprove the once popular Moa’s Ark theory which maintained that most of New Zealand’s terrestrial fauna had been present in New Zealand since the breakup of Gondwana. The paper has also been cited in two additional papers published by the same three authors. In one of these, morphological characters were overlaid onto the molecular phylogeny created from this research resulting in the origin and history of five morphological characters being more fully understood. In the second paper published in the same year, a nuclear gene was sequenced for the same moths and was used along with the morphological and molecular phylogeny from the original paper to find additional support for three of the Wiseana haplotypes that had been identified. There are plans to name these haplotypes in the future.
While there is still a lot to learn about the New Zealand ghost moths, this research has helped us to understand more about the phylogeny and taxonomy of these fascinating moths as well as helping us to learn more about the origin of New Zealand fauna. Ghost moths often emerge when a front is approaching so appreciate these native weather indicators next time they annoy you by flying into your house at night!

The full reference for the article is: Brown B, Emerson RM & Paterson AM. 1999. Phylogeny of ‘‘Oxycanus’’ Lineages of Hepialid Moths from New Zealand Inferred from Sequence Variation in the mtDNA COI and II Gene Regions. Molecular Phylogenetics and Evolution 13, 463–473. 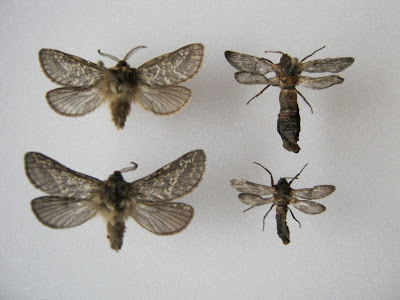 The males (left) and females (right) of one of the New Zealand ghost moth species with a flightless female: Aoraia macropis collected up the Old Man Range. This species is active at dusk and also in cloudy or misty conditions. (Photo: Hamish Patrick)
Posted by Hamish at 10:28 AM

Your statement "an estimate on time divergence between the Australian and New Zealand members of this lineage revealed that the New Zealand species had split from their Australian relatives around 3-4 million years ago (MYA). This indicates that they dispersed to New Zealand rather than remaining here since the breakup of Gondwana over 80 MYA." would be incorrect if your estimate is based on a fossil calibration which can only provide a minimal estimate and therefore cannot falsify an earlier origin. If this is the case your assertion misrepresents the evidence as do most molecular divergence claims.