One of the difficulties of living with teenage boys (of which I have three) is that it is impossible to keep food for any length of time. Well that's not true exactly; food that grew on a tree or in the ground can last a very long time. Other foods have an extremely short half-life around the house. Take chocolates, lollies, sweets and candy. If it actually makes it into the house it won't last very long at all. That can be annoying, especially when you've been looking forward to a well-earned sugar-hit after marking a bunch of student essays. What to do? As an occasional behavioural ecologist I figured that I should be able to do something. What I need to do is to make the food unappealing for the teenagers but not for me. Last week I was able to put my cunning plan into action. I visited the Re:Start mall (built of containers) in the wrecked centre of Christchurch. One of the businesses there is a grocer who specialises in importing foods. I am particularly fond of the occasional packet of chocolate disks, let's call them N&Ns, but so are my boys. However, at the grocer were several flavours that we don't normally get in New Zealand. I selected the coconut flavoured N&Ns as I knew my boys dislike that flavour whereas I quite like it. I took them home and left a couple of packets lying about. Sure enough they are still there a few days later - an unprecedented outcome. 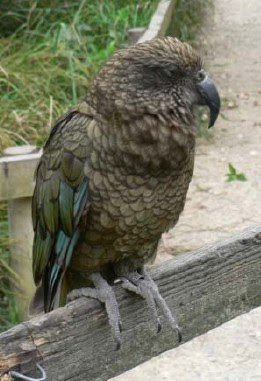 The concept of deterrence is also an important one for wildlife management. In New Zealand we have a number of mammalian pest species, such as possums, rats, stoats, pigs and so on, that cause a great deal of ecosystem harm. A major control strategy is to provide poison baits that the pests ingest and die from eating. Of course, you really don't want non-target species to eat these baits as well as they are usually the species that you are trying to protect. One non-target species that complicates control is the kea, the alpine parrot (Nestor notabalis). Kea are an inquisitive species and readily will try baits that are set to kill pest species. This is not a good outcome as kea are a threatened species. So much time and effort has gone into trying to make the poison baits aversive to eat.

Researchers at Lincoln University, Carolin Weser and James Ross, have looked at this problem with kea. Previous studies have shown that having large sized baits can help as the birds find them difficult to handle but it is not feasible to use large baits in most control operations. There is some evidence that birds will not eat green fruits and it was suggested that if baits were dyed green that kea might avoid eating them. Weser and Ross set out to test this idea. Kea from two Christchurch wildlife parks (Willowbank Wildlife Reserve and Orana Wildlife Park) were exposed to cubes of butter cake soaked in lard with non-toxic coloured dyes. Piles of each of the colours (red, yellow, green, mid-blue, dark-blue and brown) were placed on a tray and introduced to an aviary which held kea. Their behaviour was recorded for 30 minutes and the number of encounters with food, and actual food eaten, were identified. The trials were repeated several times and the order in which the colours were presented was changed. 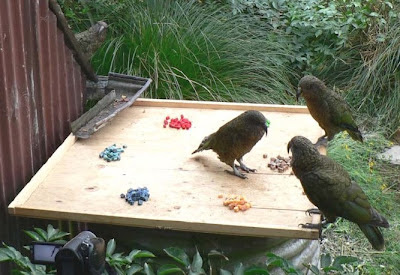 In a new paper published in the New Zealand Journal of Zoology, they found that colours had a significant effect on the selection of food by the kea. The kea preferred yellow a lot more than the other colours, then brown and red, then the two blues and finally green. Overall, kea only ate about 10% of the green bait as opposed to the yellow. Other studies have shown that the colour of the bait makes little difference to pest mammals (who are mostly nocturnal and don't use colour a great deal). So, this finding is promising in that a green bait will not affect the target but will reduce the amount eaten by the nontarget species. It's not fool proof yet, as kea would still occasionally eat enough bait to make them sick (or worse) but at least this is a step in the right direction. Right, I should head of home and see if my chocolate still survives.
Posted by Adrian Paterson at 5:24 PM