The NZ Ecological Society Conference will be held at Lincoln starting on Sunday (25th). The Conference website is here and the programme of talks can be found here. Around 250 excited ecologists will descend on Lincoln University. Some of the key note speakers are :
• Richard Hobbs, University of Western Australia – what restoration can and can’t do: opportunities and constraints in a rapidly changing world
• Trevor Worth, University of Adelaide – a palaeontological perspective on the assembly of the terrestrial vertebrate biota of New Zealand and implications in understanding the ecology of the extant biota
• Bastow Wilson, University of Otago – does ecology have any theories, and if so do they work?
• Hamish Campbell, GNS Science – geological perspectives for permanent land during the Zealandia-New Zealand transition
• Grant Norbury, Landcare Research – dryland habitat modification and succession: implications for pest ecology, impacts and damage mitigation
• John Leathwick, Department of Conservation – integrated prioritisation of the management of New Zealand’s ecosystems and threatened species
• Kerry Jayne Wilson – celebrating 50 years of ecology teaching at Lincoln with a look at her work on seabirds.

It should be a great time!
Posted by Adrian Paterson at 2:22 PM No comments:

This blog post was written by postgraduate student Grace Leung as part of the course, Research Methods in Ecology (Ecol608). Grace is one of three students that revisits a Lincoln University research area on calculating the ecological impact of New Zealanders published in the late 1990s.

Sound complicated? It is. The original study calculated an ecological footprint for Canada using many sources of data, research from several countries, spanning a long period of time. Because this project was so big, it is difficult to replicate for other countries and compare over time. Economists from Lincoln University in 1998, attempted to improve this method by modifying it to use sources of data that are reliably updated, then applied the model to the New Zealand economy.


By using economic, demographic and land-use data from Statistics New Zealand and the Official New Zealand Yearbook, Lincoln economists Kathryn Bicknell, Richard Ball, Ross Cullen and Hugh Bigsby created a method of calculating a country’s ecological footprint by calculating standard input-output coefficients, multiplied by the  land to value of output ratio for each industrial sector. So while Bicknell and her team’s method may not be less complicated than Wackernagel’s, their use of standardized national statistics means that it is relatively easy to monitor changes in our footprint over time. Since most developed countries record these statistics, it can also be used to compare our footprint with other countries.

So how big is New Zealand's ecological footprint? When Bicknell and her team calculated it in 1998, our footprint was 3.49ha per person, This included 64% of our productive land being needed to support our current average level of consumption and waste production, plus imports. This accounts for the fact that we export a lot of what we produce and also import some of what we consume. Compared to the Netherlands, we have a slightly bigger ecological footprint, but smaller than that of the US or Canada.

Although comprehensive, Bicknell does admit that there are some limitations to their method, such as not including the amount of marine resources needed to support our needs. With ever growing emphasis on sustainable development and living within the means of this planet, methods of calculating ecological footprints have continued to improve since this paper was published. In 2012, Wackernagel’s Global Footprint Network, with its improved methodology, calculated New Zealand’s footprint to be 4.31ha. Although this means we are still living within the means of our productive land, when projected to the global scale, this level of consumption will require 2.43 planets. You can even calculate your own household’s footprint on Wackernagel’s Global Footprint Network. See how you compare with the New Zealand average and the rest of the world. Go on, are you a Big Foot?
Posted by Grace Leung at 10:04 AM No comments:

This blog post was written by postgraduate student Sophie Papanek as part of the course, Research Methods in Ecology (Ecol608). Sophie is one of three students that  revisits a Lincoln University research area on calculating the ecological impact of New Zealanders published in the late 1990s.

Field guides need several years to learn how to distinguish animal tracks. We human beings also leave footprints on the biosphere as we use its resources and services, but these footprints cannot be tracked so easily. Evaluating human pressure on the planet is one of the most discussed topics nowadays with all kinds of footprint models having been created and used for different assessments. But what can we learn from these approaches?


There are several methods developed by consultancies or researchers all over the world, making it very difficult to get comparable results. The Ecological Footprint created in the early 1990s by Canadian researchers Mathis Wackernagel and William E. Rees is perhaps the earliest of these models. To calculate your own footprint with this method, visit the Footprint Network website. We could wonder how these numbers are actually calculated. This model uses a matrix of consumption (food, housing, transport, consumer goods and services) and land use (built-up areas, crop land and pasture, managed forests and energy land) for a given population. Sounds complicated? Actually, this model has been criticized for being over-simplified, and scientists have tried to find other methods since then.
Probably the biggest competition to the model was developed by New Zealand researchers at Lincoln University, and used the input-output macroeconomic technique, making the calculations even more complicated. It has been refined since then, but not widely used. A synthesis of the two models, which is called the combined approach, has also been created by researchers at the University of York, UK aimed at solving problems of lack of data sources, and incomparable results. However, the combined methodology has not gained world-wide recognition either, perhaps because it is more profitable for companies or research institutes to develop and market their own methodology. But why is it necessary to have one unified methodology at all?
To answer the question, we could give the example of the ecological footprint of New Zealanders, which has been calculated by using three different methods between 1998 and 2000, the smallest result being 3.4 and the largest 9.6 ha, which are hardly similar. A consistent footprint method, on the other hand, could have several uses besides education, including policy making or project plan development.
The issues of methodology and comparability become even more complicated if we consider carbon and water footprints as well (for further details visit the Water Footprint and the CarbonFootprint websites). It seems that each member of the Footprint Family can only capture a limited range of the complexity of sustainability. Thus they are more like bases on which discussions can begin and better answers can develop. Until a more consistent and unified methodology becomes widespread, we could use the existing models as a tool to create awareness and promote the recognition of ecological limits – as well as the limits to our knowledge about the ecosystem and sustainability.


Posted by Sophie Maria Papanek at 10:04 AM No comments:

Measuring how clean and green New Zealand is

This blog post was written by postgraduate student Stephanie Heinicke as part of the course, Research Methods in Ecology (Ecol608). Stephanie is one of three students that revisits a Lincoln University research area on calculating the ecological impact of New Zealanders published in the late 1990s.

New Zealand markets itself as a clean and green country. In a study commissioned by the Ministry for the Environment, it was estimated that this image is worth hundreds of millions of dollars. This is how much New Zealand would lose if international consumers would start to think of this country and its products as not being clean and green.

But how clean and green is New Zealand? And how can it be measured?
An often used approach to assess the sustainability of consumption and production patterns of a country is the ecological footprint. This method calculates how much productive land area is needed to provide all the stuff a person consumes, like food, clothes, and housing as well as how much area is needed to generate energy and to absorb all the waste. This can be calculated for an individual, a community and also a country. When comparing these numbers with the land that is actually available, it gives an idea of how sustainable a lifestyle is. 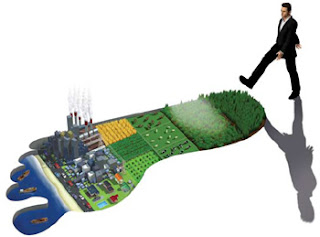 The area needed to produce everything we consume: food, goods and services, housing, energy, ... Graphic by Institut Escola Les Vinyes

Coming back to our initial question: how clean and green is New Zealand? Bicknell and her colleagues found that the ecological footprint of New Zealand is 3.49 ha per person. When exempting the land needed to produce export goods, New Zealand is one of the few developed countries that have enough land to cover its consumption requirements. This is not necessarily due to the fact that Kiwis are more sustainable in their consumption patterns but, rather a result of the low population density.

This becomes clear when looking at the per capita land requirements. As this is a new methodology, it is not directly comparable to earlier numbers but it does resemble estimates from other developed countries. Bicknell and her colleagues concluded that the ecological footprint of New Zealand is noticeably smaller than the ones of the USA and Canada, but it is bigger than the one of the Netherlands. And it is far bigger compared  with countries such as India.

In the end, this reinforces earlier perceptions. Yes, New Zealand is cleaner than some other developed countries. But if everyone lived like a Kiwi, we would need more than three planets. That can hardly be called a sustainable lifestyle. This brings us back from the abstract level of countries to each individual. The lifestyle choices we make have direct effects on the environment. If you want to find out how big your own ecological footprint is, go to one of the online ecological footprint calculators – try this one! And maybe more importantly – find out how you can reduce it.

This article is based on:
Bicknell, K.B., Ball, R.J., Cullen, R. and Bigsby, H.R. 1998. New methodology for the ecological footprint with an application to the New Zealand economy. Ecological Economics 27: 149-160.