Danger UXB! What happens to poison in pest carcasses?

Lincoln University has a special link to the German University of Goettingen. We run a joint Master of International Nature Conservation. Students who enrol in this degree spend a semester at each university doing papers. So each year we have about 15, mainly European, post grad students in our classes from Germany. When our Lincoln students ask about doing this degree they usually focus on what it will be like in Goettingen. There is one potential hazard that I only read about last week, unexploded bombs. It took me back to a favourite TV programme of my younger years 'Danger UXB!' where a British unit went around England diffusing UneXploded Bombs dropped during the Blitz. During the second world war the allies also dropped millions of bombs on Germany. A small percentage of these bombs did not explode and are still buried in various parts of Germany, including Goettingen. Unfortunately, these bombs were not made to last for long periods and most are reaching the stage where corrosion is liable to set them off. There is (and has been) a major effort to neutralise these dangerous items before they cause casualties.

This problem of weapons working longer than intended is also an issue when it comes to wildlife pest management. A common control method for reducing numbers of rodents, possums and mustelids in New Zealand is to use poison baits. The target animal eats the bait, ingests a lethal dose of poison and dies. This has been an incredibly effective tool for reducing the impact of pest species in conservation areas. There are also a lot of people who are uncomfortable with putting poison out into the environment. What happens to the poison over time, are we creating some UXBs that may cause problems at a later date? If a possum dies from ingesting poison then what happens to the poison in the body? If a scavenger, say a pig or dog, comes along and eats the carcass then will it too be poisoned? 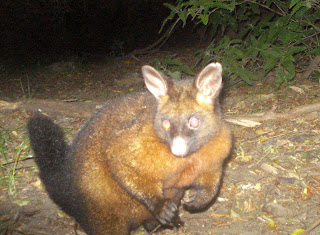 
Charlie Eason and James Ross from the Centre for Wildlife Management and Conservation based at Lincoln University have joined with Aroha Miller, a colleague based in Sweden, to look at this phenomenon, known as secondary poisoning, with the most commonly used toxin in New Zealand pest control, sodium fluroacetate (1080). The group looked at decades of research and their findings have been published in the New Zealand Journal of Zoology. 1080 breaks down through normal metabolism in just a few hours, so if an animal takes a sublethal dose and then is later eaten by a predator there are no particular problems. If an animal takes a lethal dose then metabolism stops at the time of death and the toxin remains.

Eason and co found that for most organisms, such as birds and invertebrates, there was little risk of secondary poisoning killing the scavenger. With mammals the risks increased although notable scavengers like pigs are more likely to become ill rather than die. Of most concern are mammalian predators. Cats and mustelids (stoats and ferrets) are likely to suffer death from secondary poisoning (although these species are often the targets of control operations in wild areas anyway). Most vulnerable are dogs that require only a very small dose of 1080 to be lethal. It was found that poisoned carcasses can remain dangerous for dogs for up to 75 days, although this is determined by how cool and dry the climate is.

So are there masses of UXBs in our native bush waiting for the unwary? For a toxin like 1080 this is not a problem for the long term. For dogs there are some problems that might extend for a couple of months. Other toxins may have more scope for UXBs. In a follow-up paper soon to be published in the same journal, Eason and Ross and several other authors look at another group of toxins, the anticoagulants like diphacinone, and find that they potentially persist for several months. So toxins are not like allied bombs that can cause problems many decades later but their effects do linger on for some weeks after the poisoning period.
Posted by Adrian Paterson at 5:02 PM No comments: