An invasion of no consequence? Hieracium in tussock grasslands

Robbie Deans has been sacked as the coach of the Wallabies. Deans lost his job because he did not get the outcome that his employers, Australian rugby, sponsors or the Aussie rugby public wanted, namely a series win over the British and Irish Lions (in the first instance) and more wins over New Zealand (in the longer term). Is Deans a bad coach? Maybe he did the best that could be done with the resources available? Whatever, he has paid the price of not producing what was expected (however unrealistic). I was relecting on this culture and how it differs a great deal from being a scientist. As a scientist we do have expectations when we set up experiments and collect samples but we are more than happy to be proved wrong by the data. It would be a grim old world if a scientist had to find what was expected by a funder! Ecology is certainly a field in which we would struggle to deliver a preferred option. Ecology is inherently complex. You are dealing with many species at a landscape level, usually with processes that take a great deal of time. That's not a simple recipe for predictability. 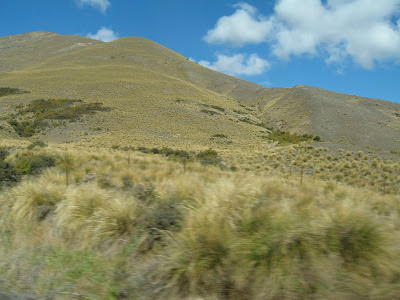 One topical ecological issue is the management of tussock grasslands. We know that tussock grasslands have been the scene of a massive invasion by introduced Hieracium weeds for the last few decades. We know that tussock grasslands have been managed in many different ways. We know that localised studies have suggested that there might be major impacts from these factors. However, in ecology we strive to get a handle on the big picture, what's happening over time (decades) and space (hundreds of kilometres). Hannah Buckley, of Lincoln University, along with her MSc student Nicola Day, had access to a long term study in tussock grasslands from around the South Island where they could look at data collected from 124 permanently marked transects from sites throughout Otago and Canterbury that have been measured for 25 years. As part of the overall project they collected the most recent samples and established that weed species of Hieracium have been substantially increasing in the plots over the 25 years. They were interested in what this invasion would do to the tussock grasslands over this period.
More...


Sampling was intensive with 50 samples taken along a 100 m transect at each site. The presence of each plant species was recorded and soil samples taken. Site characteristics, like elevation, slope and precipitation were recorded. Crunching the numbers from 25 years worth of research was a large task and was recently published in Austral Ecology. What became very clear was that scale was incredibly important in understanding what has been going on in tussock grasslands. After the first decade it seemed clear that negative changes in plant species composition (what species grew there) and species richness (the total number of species that grew there) had occurred. Nothing too surprising there. However, by the end of 25 years species richness had, in fact, increased again. Their results showed that this fluctuation was not the result of Hieracium invasion (and they speculate that it might have been linked to the severe reduction of rabbit populations at the end of the 1990s due to rabbit haemorrhagic disease) and has important implications for understanding impacts in ecosystems. The first implication is time. Looking in the short term (a few years) may give an imprecise view of what is happening in an ecosystem because short term fluctuations can be mistaken for long term processes. There is evidence from the data that even 25 years is too short for understanding tussock grasslands. The second is space. During the last 25 years there are many sites where there does seem to be a clear relationship between increasing Hieracium and declining plant species richness. However, there are also many sites where there is no relationship and even some where richness has increased. Looking over a wide range of sites is important if the goal is to find a general relationship.

This was an unexpected result for Hannah and Nicola, and a reminder as to why we do science. All results carry us forward and provide us with material with which to ask the next set of questions. One of those questions is to explain how this long-term invasion by a weed species has had such a low impact on plant species throughout the range of tussock grasslands. The result does support a theory that many invasive species are 'passengers' rather than 'drivers' of landscape level changes. However, Hannah and Nicola point out, though, that there might be several reasons for lack of an impact from Hieracium. First, tussock grasslands may be reasonably open ecosystems where there are few strong interactions among resident species and Hieracium is just one more species. Second, losses of native plant species may occur only at the local scale where there is competition for space between Hieracium and native plants but not at the larger scale where the major competition is for resources (where sometimes Hieracium is good at getting local resources and sometimes they are not). Third, perhaps there has not been enough time for native plants to fully respond to Hieracium, in much the same way that bush stands can look healthy but are populated by mature trees with no young saplings surviving, such that when the older trees die, there is no replacement and the remnant is lost. Tussock grassland species are perennials and long-lived so this 'extinction debt' is a real possibility. All in all, these findings mean that the next sampling period, a further decade on, will be of much interest to see what clues can be found to help understand tussock grasslands. This uncertainty is a strength of science and is welcomed, something that we have over international rugby coaches!

Posted by Adrian Paterson at 3:30 PM