The first thing he found was a Bi-Coloured-Python-Rock-Snake curled round a rock. 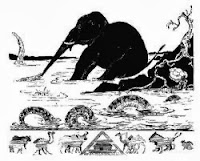 While doing my PhD in Zoology at Otago, I had my own show on Radio One, the student radio station. Every Sunday morning from 9-11am the Inner Mongolia A and A Good Time Kiddie Show would hit the Dunedin airways with 'fun, jokes, songs and laughter - so don't turn off the radio or we'll tell Uncle Genghis'. I did the show with Alison (the other A), who was a schoolfriend of my sister, and we had a lot of fun. We even had an audience of kids who would ring in with requests. One of the coolest stories that we played was from a record of Rudyard Kipling's Just So Stories where Bobby McFerrin provided the music and sound effects and Jack Nicholson provided the narration. If you have kids you owe it to them to find these audio stories. My favorite story was The Elephant's Child which explained how the elephant got his trunk. The Elephant's Child (full of 'satiable curiosity - he must have been a budding scientist), on the advice of the Kolokolo bird heads to the banks of the great grey-green, greasy Limpopo River, all set about with fever-trees, to find out what the Crocodile eats. Complications ensue. Luckily, a Bi-Coloured-Python-Rock-Snake is on the scene to help rescue the Elephant's Child from the Crocodile who has grabbed hold of his nose, which stretches out to become a trunk. It's a great story, expertly told, and any time I hear the word 'python' I can hear Jack Nicholson with Bobby McFerrin warbling in the background. 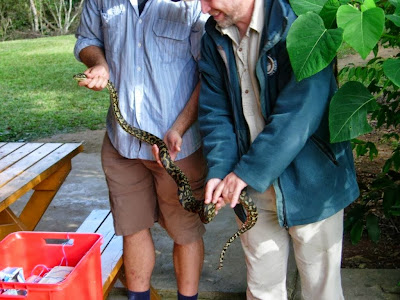 The Elephant's Child's question is a good one. Finding out what animals eat is an important part of ecology and behaviour. Unfortunately, we can't just walk up and ask our animal like the Elephant's Child did. There are several methods that we can use. We can observe animals and see what they put into their mouth (but that only works for obvious species in well lit areas). We can look at what we find in scats (but we have to find the scats). We can stomach pump to bring food up (but we have to capture the species). If the animal is dead, we can cut open the digestive system and see what we find (but we have to find the dead individual). Increasingly, DNA is being used to identify the anonymous chunks of tissue that can be found in stomachs or scats. We have a number of studies looking at this issue in our department including figuring out what fish species fur seals eat, what carnivorous snails like to munch on and what cats get up to when they are away foraging. Tim Curran, a recent arrival from Australia, was part of a study that looked at what pythons eat, not Bi-Coloured-Python-Rock-Snakes but the Carpet Python (Morelia spilota) from northern Queensland. This study was published recently in Australian Mammalogy and included former Lincoln University ecology technician Alastair Freeman (or Spot) as well as colleagues Jennifer Fill and Georganna Story.


On November 21, 2006 a 2 metre carpet python did not make it across a dirt road in remnant rain forest near Yungabarra, Queensland. This was rather unfortunate for the python but useful for the scientists who found it. The python was added to a study that looked at gut contents from 51 similarly road-safety challanged snakes. Overall, there were at least 17 different mammal species found in these python stomachs. Our snake from Yungabarra was of particular interest as it contained hairs that were found to be from a cryptic species of tree mouse (from the Pogonomys genus). Mammal hairs from different species have unique structures when examined under a microcope allowing species to be identified. A species is known as cryptic, in ecological work, if it is difficult to locate. Although Pogonomys is known to be in the general area of the Atherton Highlands it is seldom recorded in monitoring studies as individuals are difficult to live trap. Tree mice spend a lot of time foraging in the tree canopy zone and the rest of the time in underground colonies. It is not clear whether this snake caught the tree mouse in its burrow or up in the tree as carpet pythons hunt in both areas, but it does confirm the presence of this mammal species where other methods haven't. Ecologists are increasingly making use of predators as sampling tools. Owl pellets and cat scats can provide important information about what lives in an area (and their relative abundance) by taking advantage of a 'data collector' that can actively find cryptic prey. Snake gut samples can now be added to this list.

Rather than asking the crocodile what it eats, the Elephant's Child could have watched and observed what the croc ate, he could have waited and observed what came out of the croc in the Reptile Restroom, or, if a crocodile hunter had been in the area, he could have examined the croc's stomach contents. That might have made for a less interesting 'Just So' story (and elephants would not have ended up with a long truck) but it might have better sated his 'satiable curiosity' in a more approved health and safety manner.

Posted by Adrian Paterson at 4:52 PM No comments:

A pied-piper for possums?

One of the issues with running a blog, such as EcoLincNZ, is in attracting an audience. It's a big online world out there with plenty to read. Finding and attracting readers is a major headache. We use several strategies. There is a link from our departmental site, a link on the Lincoln University outreach site, the address is in the signatures on our emails, we announce new articles on our Department of Ecology facebook page and with LU tweets to alumni. We have made the recent content of the site a round of questions in our annual Year 12 Big Biology Quiz for Canterbury school students. We advertised at the New Zealand Ecological Society conference held at Lincoln last year. Often people find us through Google searches and the like. Last year we had a blog on 'Bigfoot in NZ' which was about carbon footprints and presumably disappointed the 1500 Americans that looked at the article over the first couple of days. Last week we had a surge in hits on our article 'Watch me Wallabies Feed, Mate' when Rolf Harris was in the news. Of course, we really want people finding the site to interact with it; read the whole article, maybe leave a comment, click around and read some more articles. Finding ways of getting our targets (that would be you dear reader) to find and interact with the blog articles takes up a bit of our time. Interestingly, a very similar issue exists in wildlife management where getting a pest, say a possum or a rat, to find and interact with our devices, such as a camera-trap, bait station or tracking tunnel, also takes up a lot of our time.

If you have a large population of pests, say possums, and you place a device in the field, chances are that some individual possums will bump into the device simply because there are so many possums about. After a control operation when the possum population has been reduced dramatically, there is much less chance of the remaining individuals finding your device. There are several tricks by which you can increase the chances of an encounter. There could be a colour or a scent added, for example. One of the difficulties with these methods, especially in forest, is that these lures only work over short distances. One potential method to provide a larger zone from which to draw a possum to your device is to use sound.
More...


Matt Kavermann has just completed a PhD where he looked at the potential of sound to act as a lure to stimulate possums to come to a site and to interact with a device, like a bait station or waxtag. Possums are curious animals and when they find something unusual in their territories they will generally investigate it (which usually means biting it thoroughly). Matt, with his supervisors James Ross and Adrian Paterson, developed several generations of devices that produced audio lures (usually a high-pitched beep). The idea was that a possum would hear the noise from a distance and be guided to the waxtag or chewcard which they would bite and leave evidence of their presence. To test this idea, Matt set up an experiment in beech forest at Mount Misery at the south-eastern end of Lake Rotoiti in the Nelson Lakes National Park. Matt had 48 monitoring sites located in a 150m x 150m grid. Half of the sites had the audio lure (a beep every 15 minutes)and half were silent. At each site Matt had a waxtag or a chewcard to record possum presence. Matt checked these sites daily for 10 days. Given the terrain, it's not called Mt Misery for no reason, this was a huge effort.


Matt's results have just been published in New Zealand Natural Sciences. Matt found that the audio lure increased possum detection at chewcards by 30% and at waxtags (which are not as sensitive) by a whopping 900%! There was evidence that the audio lure was dragging in possums from over 300m away to the detection site. It appears that possums do hear the lure and are curious about what is causing it. They move to the source of the sound and are more likely to interact with the device placed there. This is excellent news for possum control. Audio lures may be a great way of counting how many possums survive an intense control operation. Better yet, audio lures may provide a way to target these remaining individuals to reduce pest populations to zero by encouraging them to move to a site with toxic bait. The pied piper was able to remove all of the rats from Hamlein by playing his music. Maybe he was onto something!


Posted by Adrian Paterson at 5:51 PM No comments: