In which we dwell on the problems of the niche

Most people tell me that they don't remember much about ecology from school. One thing that does remain, once you scratch the surface with some gentle probing, is the concept of the niche. The niche does have an advantage in that it has entered common usage, e.g. finding your niche, niche products and so on. In common language niche, when not being used to mean a useful recess in the wall, generally refers to something that is especially suited to a person's abilities. In ecology it has a somewhat similar meaning where it defines a way of living for a species. If pushed, people often will remember that different species will not share the same niche (otherwise they are in direct competition for the same resources and bad things will follow). The niche seems to a fundamental part of ecology. Surely there's nothing left to know about it? Well of course there's plenty left to know. In fact ecologists haven't even been able to settle on a preferred definition of the niche.

We have a new ecologist here at Lincoln, Will Godsoe. Will comes to us after a short stint at University of Canterbury. Before that he was at the University of Tennessee (Knoxville) and University of Idaho (Moscow). Will has thought long and hard about why organisms are found where they are. When I look at the papers that Will has published I notice a certain similarity in interests with what I do. We both are interested in species distributions (where you find them, where you don't) and what shapes these distributions (abiotic factors like climate, biotic factors like disease or food). We both have an interest in coevolution, when organisms evolve together and in response to changes in the other. One could almost say that we share the same or a similar niche. So does that mean that Will and I are now locked in a battle to the finish, in conflict until one of us claims the niche? Luckily, a closer look at our interests reveals that we have complementary and only partially overlapping interests. Broadly speaking Will is an ecologist and I am an evolutionary biologist. Will is interested in the distribution of individuals, populations and sometimes species. He cares about what happened yesterday or last century or a few thousand years ago. I am more interested in the distribution of orders, species, and sometimes populations. I care about what happened a hundred thousand or a million or 50 million years ago. Will uses experiments, observations of organisms and statistical models to answer his questions. I mainly use DNA and evolutionary trees to answer mine. When Will publishes a paper on the niche ("I can't define the niche but I know when I see it" in Oikos) he is talking about statistical properties of determining a niche. When you publishes on species distributions (in Ecography) he is using models to show how much different species overlap. When he publishes on coevolution (in New Phytologist) he is looking at how much climate drives a close relationship between yucca plants and their pollinating moths. While there is overlap between us, where ecology meets evolution, we exist in different niches. That's a relief - we won't have to enter into alpha male conflicts to show who's boss! So welcome to Will.

Posted by Adrian Paterson at 3:31 PM No comments:

I've been thinking lately about the consequences of the disconnect between New Zealanders' conservation ethic and conservation knowledge. We New Zealanders are typically supportive of conservation, especially in our national parks. In 2010, tens of thousands of people protested down Auckland's Queen Street when the Government contemplated mining in national parks. Yet very few of us appreciate the full extent to which we now live and work in landscapes dominated by introduced species, both cultivated and wild. Nor do most people appreciate the ongoing declines and threats to native species in many lowland landscapes. I suspect that this disconnect has a big impact on which conservation topics become big issues of public debate.

For example, there has been much greater public interest in the proposed 43 km Fiordland monorail to Milford Sound than the case of a farmer destroying a QEII covenant in lowland Canterbury. The first story involves a proposed tourism operation through southern beech forest, one of the most common habitats in our Department of Conservation managed conservation land. There is the important issue here of the extent to which we allow private tourism developments on public national park land. This issue is not clear cut, as any damage done to habitats will need to be restored or mitigated, Department of Conservation (D.O.C.) is paid a concession for such operations, and D.O.C. and the conservation work it does could certainly use the money. But this is undeniably A-grade world class scenery. The second story has Federated Farmers supporting the QEII Trust's decision to take a farmer to high court for destroying a legally protected area of critically threatened habitat on his private land. We don't have an east coast dry land national park and much of what's left are small fragments of wild habitat acutely vulnerable to fires, dairy runoff, browsing, and weeds. Much of the area is in covenants on private land, often filled with rare and threatened species. These habitats are also what I expect most people would regard as ugly patches of scrub.

Medbury Reserve, one of the last areas of natural dry land woody habitat in lowland Canterbury. Most of this reserve was destroyed in an accidental fire and it is now surrounded by dairy farming. Biodiversity conservation in New Zealand is as much about these small reserves of critically rare habitats as they are about pest mammal control in National Parks or bird conservation on offshore islands.

I see the relative interests in these two stories reflecting the fact that when most New Zealanders are in these wild places, they see scenery rather than New Zealand's unique natural history. I posted two stories on my blog recently that underscore New Zealander's lack of knowledge of New Zealand natural history. One post summarises the results of my surveys of first year students at Lincoln University and their knowledge of which species are native and which are introduced and whether they can identify common native and introduced New Zealand species. The other post summarises how much residents living around Christchurch's old growth forest remnant Riccarton Bush know about the plant species in the bush. In both cases, I've been surprised by how little New Zealanders know about the natural world around them. Of the more than 1000 first year students I have surveyed at Lincoln University, only 48% knew that bellbirds are native and only 20% knew that grey warblers are native. Both are endemic species that can be found sometimes on the Lincoln University campus (unlike kiwi, which 90% of students knew are native). Only 44% of students knew that brown trout are introduced species and not native, and only 27% could correctly name a red admiral butterfly (kahu kura) from a photo. Red admirals are an endemic butterfly that are sometimes seen on the Lincoln University campus and are occasional across Christchurch. Only 13% of students could name a NZ scaup and only 5% a rifleman. Scaup are a small diving duck commonly seen on Christchurch rivers and are a high profile local conservation success. Rifleman are harder to find but still present in parts of nearby Banks Peninsula. Only 2% of students have correctly identified a brown creeper from a photo. This is an endemic forest bird that can be locally common in some Banks Peninsula forest reserves and is a relative of the endangered mohua (yellowhead). 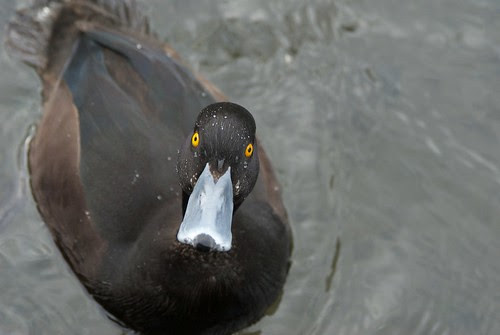 A scaup on the Avon River. These cute little black diving ducks are common on Christchurch rivers now yet there were no more than 200 on all Christchurch waterways in the mid-1980s. Predator control and the return of natural river margins in Christchurch have seen this species rebound spectacularly to over 7000 birds. Despite this, only 13% of first year Lincoln University students know a scaup when they see one.

The Riccarton Bush study was by Lincoln University M.Sc. student Brendan Doody (now on a Commonwealth scholarship doing his PhD at Durham University). When he showed local residents a seedling of kahikatea, the dominant canopy tree in the bush, only 2% of people could correctly identify it. Brendan also asked people to say whether each of a list of 16 tree species "were in New Zealand before people arrived". We chose a selection of common species from Riccarton Bush and from Christchurch gardens and parks, and listed them by common name and scientific name. We were surprised that even iconic native species like lancewood and broadleaf were not commonly known to be native species. Similarly, only about half of people knew that iconic exotic trees like macrocarpa and the weed crack willow are not native to New Zealand. Just like my student survey, Brendan's results suggest that most New Zealanders have a limited awareness of the species around them and their natural history. Riccarton Bush must be a wall of leafy green texture to most people. 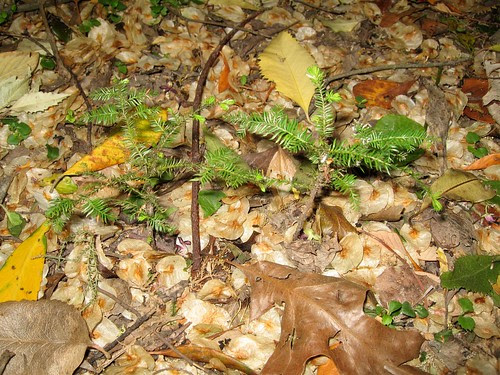 Despite their limited knowledge, support for Riccarton Bush was high among local residents. Over 95% of people agreed that Riccarton Bush was an asset to Christchurch and over 90% disagreed with the statement "The future of Riccarton Bush is not important to me". About half of people were pulling up wild Riccarton Bush seedlings from their garden because they didn't recognise them. New Zealanders support conservation but they don't know native species. From the perspective of biodiversity conservation, the outcome of the Canterbury kanuka woodland story will be much more important than the Fiordland monorail decision. It would be nice to see the story gain more traction in the media and New Zealanders generally. More generally, the challenge is for New Zealanders to match their support for conservation of New Zealand nature with knowledge of that nature. If we are to sustainably manage New Zealand's unique biodiversity through the challenges of the coming decades, New Zealanders need to see New Zealand nature as more than scenery. 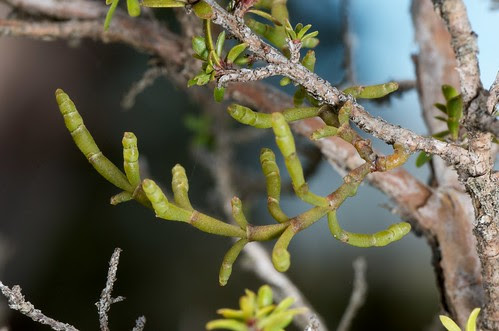 A rare dwarf mistletoe growing on a Canterbury dryland kanuka in the small Medbury Reserve.
Posted by Jon Sullivan at 2:07 PM No comments: