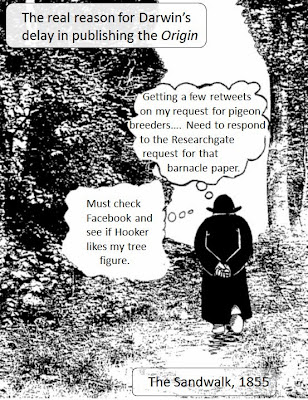 Back around the start of the earthquakes I was putting some old cartoons of Darwin on the Sandwalk (his private walk around the woodland at his estate which he ambled about most days to get in some serious thinking time) online. The earthquakes put this project out of my mind till recently when I came across a cartoon. The idea was that it would be useful to know what Darwin thought about as he paced the Sandwalk. Another complementary theme was using this to explain why Darwin took so long to write and publish 'On the origin of species'. These cartoons first appeared in SYSTANZ newsletters in the 1990s. I think it's time to continue them with a 21st century theme.
Posted by Adrian Paterson at 12:47 PM