Shadow chasing – When monitoring tui requires the mindset of a Ghostbuster

Vanessa Mander is a post-graduate student studying for an MSc in conservation and ecology at Lincoln University. Here she tells us about radio-tracking tui.

Ever since I was a young girl I have always wanted to be a scientist, long before Lego could influence my choice of career with their ‘female’ scientist figure. I was not drawn to being a Barbie (those that know me will be rolling on the floor laughing right now), nor a fashion editor (again, people are struggling to breathe for laughter) as my heart was always drawn to New Zealand's wondrous and unique flora and fauna. Initially, I thought I would work in a lab, I always had a knack for chemistry and so my first stint in university around 15 years ago produced a run-of-the-mill BSc in chemistry. 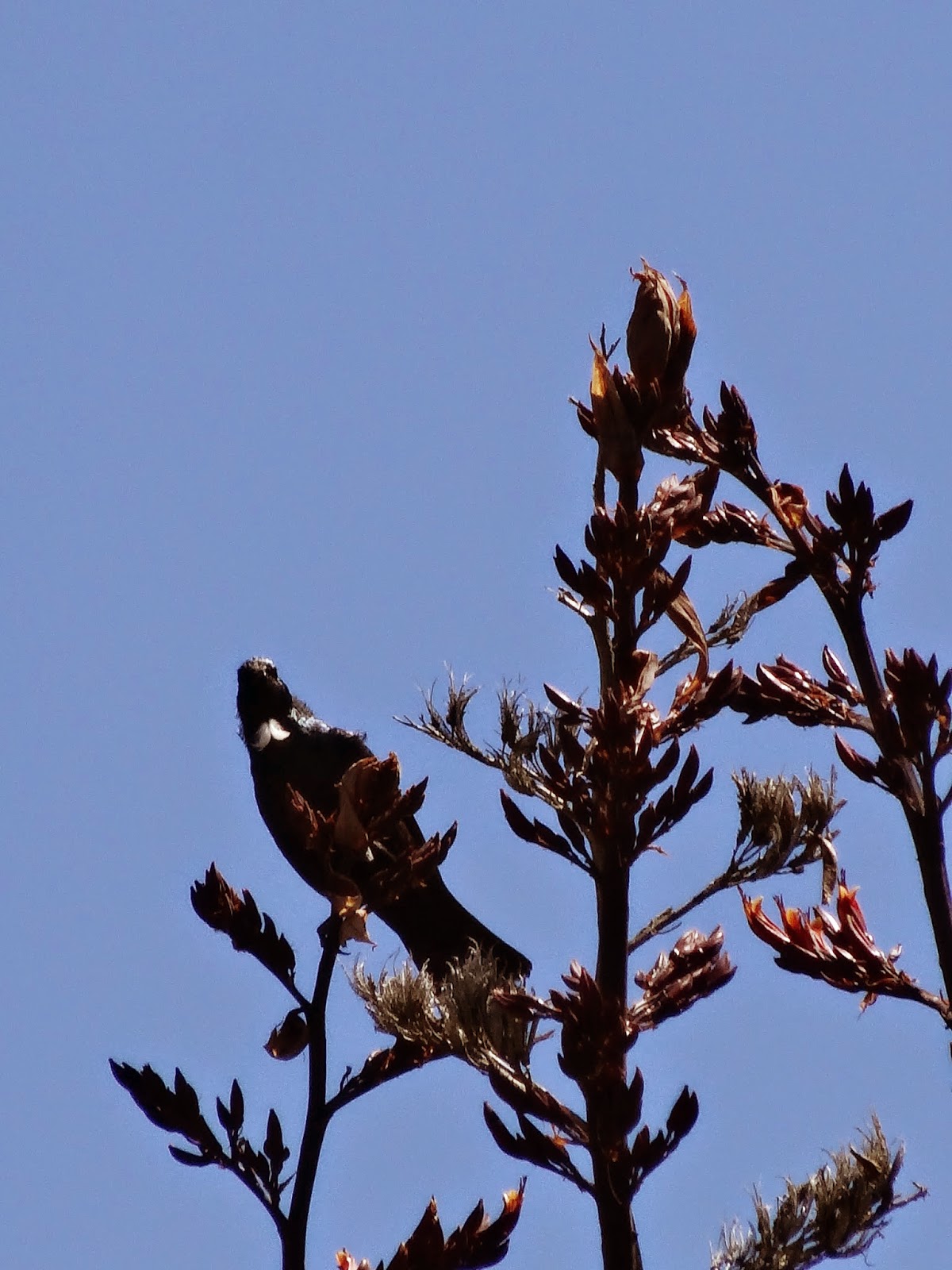 Life intervened and I found myself working for the government in tax issues and tax law, working as an accounts nerd and being the ultimate domestic child-wrangler/executive/CFO. Not the career I had envisioned but one I am still immensely proud of. It was a family holiday to Stewart Island that led to an epiphany of sorts. We took the kids on a trip to Ulva Island, a predator free island where many species of endemic New Zealand birds find a safe haven. While walking amidst the beauty of the forest we encountered a South Island saddleback (Philesturnus carunculatus) collecting nesting material in preparation for breeding. I was spellbound, elated and excited all at the same time and I knew that this field was the science career I wanted to embark on. After some personal research, I enrolled for the Master of Science at Lincoln University, where Dr Laura Molles presented me the opportunity to participate in a research placement tracking tui (Prosthemadera novaeseelandiae) in conjunction with the Banks Peninsula Conservation Trust (BPCT). I felt that I had been given a gift, one that would provide me with valuable skills and a taste of a dream coming true.

Most of my work in this placement involved radio telemetry. The receiver and aerial combo is reminiscent of the 1980's Ghostbusters films. Five tui had transmitters fitted, two of which had been recently attached so the likelihood of getting a signal appeared high. The three older transmitters were either found on the ground or ‘missing-in-action’, which left me tracking the female ‘Putiputi’ and the male ‘Yeah Right’. (Naming rights are given to individual sponsors of the Tui Reintroduction Programme through the BPCT. In the case of the male, by someone with an interesting sense of humour.)

Tracking tui is like a shadow hunting expedition. You spend many hours believing that they must be close by because the receiver tells you that they are, and then there are the moments that you strain to hear what you believe is a distant tui call, only to second guess yourself and think that maybe your mind is playing tricks and maybe these birds aren’t real. There were weeks where a signal was obtained but sightings of the bird eluded us. Taunting seems an appropriate word but I realize that this is somewhat forces a human personality to this behaviour. To be honest, sometimes it’s hard not to.

The ‘shadow chasing’ experience was the single most challenging aspect of this work as you often went unrewarded and somewhat unsatisfied, knowing that the target bird was in the area yet not sighting it. Frustrations don’t end there. Reading a bird’s unique combination of leg bands is often the only way we can confidently identify a bird. This only works if you are: close enough to pick the band colours and order (binoculars are ok), AND the birds orientation is sufficient that both legs are visible and not obscured by the tail, AND the tui are perched on appropriate materials that do not obscure the leg, AND bands are even present – unbanded birds appear to flaunt this a bit. In most circumstances where one or more of the conditions above are not met, there would be a fair bit of fist-shaking at the sky.

The study conducted over twelve weeks found that Putiputi remained mainly within the Akaroa region, her excursions away from the core Stony Bay Rd area (in Akaroa) decreased as breeding season approached. In this time she appeared to entertain the idea of pairing with ‘Charlie’, only for him to be replaced with ‘Laurie’ a few weeks later, she is picky apparently.

Yeah Right proved to be a traveller. He was banded and originally tracked around the Akaroa area too… handy for me doing the tracking to be sure. However, we lost the signal after a few weeks and I was a little sour about that. Fortuitously, I happen to be looking for some lost transmitters in the Okuti Valley, near Little River, and picked up a signal… from Yeah Right! His story was that he had migrated to the Okuti Valley and remained there right up to the breeding season.

﻿
Honestly, there were times that I would despair that I would see any tui. This was generally when the weather was less than optimal and the ‘shadows’ seem relatively distant. However, you were rewarded, just often enough, with glimpses into their lives… whether it was a territorial display, a soft chortle between potential pairs or just the pleasures of watching them feed, to nourish you for the dry times ahead.

The knowledge and insights I will take away from this experience include:
1. Fitness is everything (mine and birds… but mainly mine),
2. Patience is a virtue (birds have it but I am still working on that one),
3. Tui are not people no matter how much they seem like they are,
4. New Zealand is so much richer for having such a beautiful and charismatic bird.

I choose to use the term shadow-chasing because, although it accurately describes my tui experiences, it also has parallels in my life to date, except now I am glimpsing parts of the ‘career’ shadow owner and I hope to catch up with them soon.

As the saying goes “the early bird gets the worm but the second mouse gets the cheese”! (Willie Nelson).